Yet another addition to the numerous Witch Mountain incarnations on screen inspired rather remotely by the Alexander Key bestseller, this latest Race To Witch Mountain is fairly kid friendly but may leave their more jaded parents snoozing through the proceedings. Though the choice of Dwayne Johnson as exasperated helpmate to a couple of superteens from outer space, keeps the movie afloat whenever it threatens to fizzle.

Race To Witch Mountain is directed by Andy Fickman, whose previous productions She’s The Man and Reefer Madness: The Movie Musical, would seem to raise expectations a tad too high this time around. I can report with much relief though, that for a change, neither grossout raging teen hormones nor violent superpowers are part of this mix. 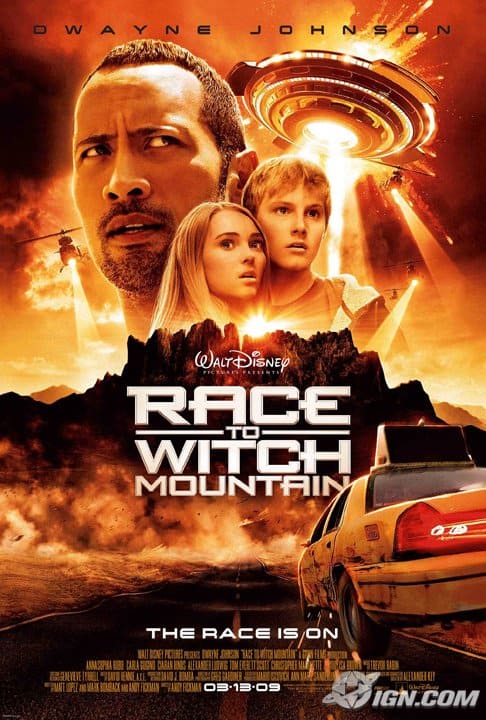 AnnaSophia Robb and Alexander Ludwig are Sara and Seth, two brainiac pubescent extraterrestrials who turn up in Vegas after they are victims of a spaceshipjacking. With unusual mental superpowers that include the ability to drain an ATM machine of all available cash, move objects of any size around at will, and translating dog barks into English, the highly peculiar pair are still in need of a bit of brawn in order to retrieve their vehicle from a mean alien. So they settle upon The Rock’s unsuspecting ex-con cabbie Jack Bruno to supply the muscle for their mission. But Bruno has enough problems of his own at the moment, since the Vegas mob is trying to force him back into their gang when he’s adamantly retired from a life of crime. Meanwhile, there’s a conspiratorial crew of government operatives with menace on their minds, who want to kidnap and dissect the super-talented teens to analyze their assets.

Also around for a little sidekick duty when not providing comic relief with maternal instinct, is Carla Gugino as Dr. Alex Friedman, a failed astrophysicist turned alien guru. Doing double duty on the big screen right now as seductress Sally Jupiter/Silk Spectre in Watchmen, Gugino here is less space expert than space cadet. And her goofy sensibilities playing out in the midst of a simultaneous Vegas UFO space expo of true believers, provide the rare moments of weird fun whenever the story gets bogged down in unnecessary self-seriousness.

These young actors and their surrogate screen parents Rock and Gugino, on hand to help save the universe if not the world, do their best to energize the often lethargic and derivative material. And the message here that brainy unconventional teens can be cool too, is not a bad one.