On April 5, 1989, Isaac Knott (Nick Stahl) survived a horrible automobile accident in which both of his parents (Michal Sinnott and Joshua Leonard) perished/ Not only did the grieving eight year-old have to handle the emotional burden of suddenly being orphaned, but he also had to adjust instantly to the prospect of spending the rest of his life in a wheelchair. For the tragedy had left him a paraplegic, and he was now fated to grow up frequently feeling frustrated by the overwhelming urge to stand up and walk again.

Fortunately, Isaac never let the infirmity hold him back, and he went on to become a successful reporter for a public radio station in New York City. In this capacity, he received an anonymous tip about a man who had offered a doctor a quarter million dollars to amputate one of his perfectly good legs. Curious about why anyone would want to be a cripple, the journalist in Isaac was compelled to determine whether there was any truth to the bizarre rumor. 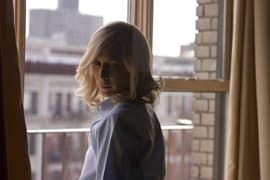 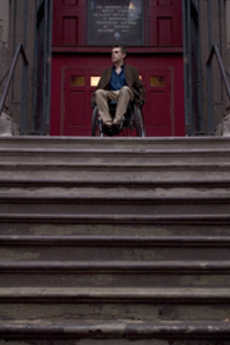 This is the deceptive premise of Quid Pro Quo, a twisted psychological thriller marking the brilliant, if decidedly macabre, directorial debut of Carlos Brooks. However, the film is far more than a well-crafted conundrum exploring the motivations of confused wannabe cripples, for en route to uncovering the answers sexual tension and other surprises arise between the protagonists, and the two take out time to pursue passion and the past.

An outsider adventure strictly for the very open-minded, presenting the numbness of paralysis, ironically, as a potential source of paroxysms of pleasure.

To see a trailer of the film, visit: