More influenced by the shoot-em-up props till you drop contemporary techie school of filmmaking than anything to do with social context, character or irony, the new and not improved Public Enemies gangster saga is very much about the how rather than the why. Michael Mann’s retro cops and robbers romp is a slick, icy minimalist reconceiving of, not so much the standard 1930s crime thriller but rather an unimaginative rehash of the classic frontier law and order genre.

In a spare, contained, by the numbers neo-western with redundant shades of fanatical white whale and unholy grail obsessive pursuits on the part of cops and an FBI locking horns in undercooked sub-rivalries of their own, Johnny Depp is miscast and in oddly soft-spoken patrician jokester mode as the contrasting larger than life, charismatic Dillinger. And with Billy Crudup’s malevolent J. Edgar Hoover as peculiar brash comic relief.

Christian Bale is tossed more meat to chew on as the driven FBI predator Melvin Purvis. But the action-heavy script is so consistently barebones, lacking in any truly subversive thrust, psychologically spotty, and with mere peripheral vision of the historical moment, that the story is simply too generic for its own good. 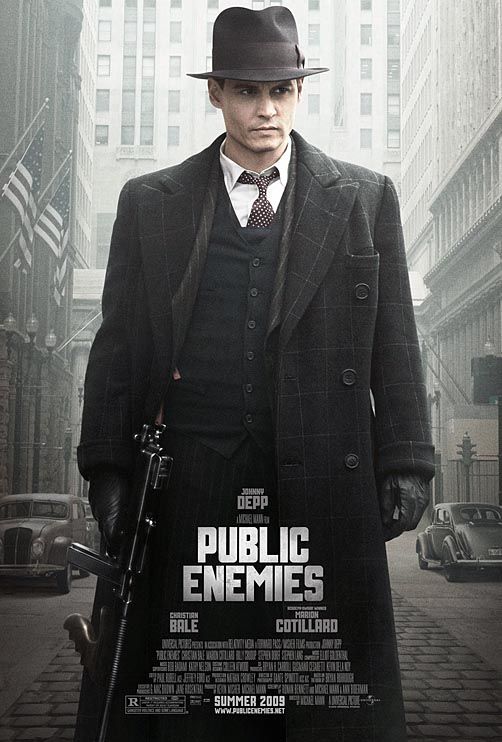 And while Depression era, gun riddled Chicago plays out like the streets of unruly Baghdad, there’s little sense of the exacerbating economic crisis of the period during a time of diminished vocational opportunities to say the least, or the desperation sparking the ensuing chaos and violence. Also missing to the detriment of this narrative, is Dillinger’s fascination with Hollywood movies, his own replay of fast forward heist stunts he gleaned from films, like the way he would jump over bank furniture, and one wild robbery where his gang successfully convinced local officials that they were filmmakers there to shoot a movie about a bank heist, and not actually cleaning out the vaults in the process.

So what remains, is a two and a half hour overly long, far from innovative tale where the guns and clothes have more personality than the people, the Great Depression is thin backdrop, and the colorful lingo and tragic tenor of the times is woefully watered down. And Dillinger is your basic badass unmatched genius escape artist who repeatedly slips through prison gates but can’t dance, communes with the swells on the sly, and takes time out to pursue an underwhelmed coat check girl in a three dollar dress (Marion Cotillard).

It’s as if Mann shortchanged a vibrant era, as somehow a time that lacked everything that defines life today, sort of no frills retro-crimefighting without benefit of cyberspace, cell phones and Blackberries. So what you get is an uncritical, bland romance of gangster culture, endless stakeouts, lurking and fleeing, and with lots of gunfire in between.

Public Enemies: A movie about a bad boy folk hero whose legendary skill as an expert shooter far outshines the camera’s talent here to shoot a movie.