In 1996, Theresa Russell starred in a picture called Public Enemies, a mob saga glorifying Ma Barker’s reign of terror as the matriarch of a crew of bank robbers comprised of her own sons. So, it’s hard to fathom why director Michael Mann would now opt to resurrect the same name for a similarly-themed film also glamorizing the exploits of a Thirties crime boss, i.e., John Herbert Dillinger (1903-1934).

But that recycled title is the least of the problems of this derivative head-scratcher. Its biggest flaw rests with its failure to engage the audience emotionally in either Dillinger’s (Johnny Depp) bloody crime spree or his wooing of a gullible hat-check girl (Marion Cotillard). For in lieu of character development, Mann has ostensibly opted to focus on crafting a grisly splatter flick featuring more Tommy Gun muzzle flashes per minute than we’ve witnessed since such gangland-era classics as The Untouchables (1987) and Dillinger (1973). 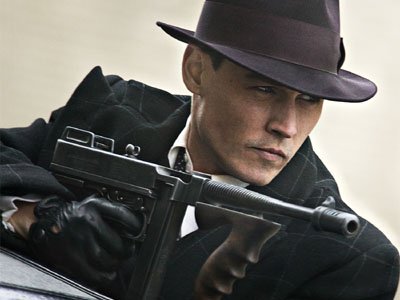 While fairly faithfully following the latter’s plotline, Public Enemies squanders the services of a couple of consummate thespians in Johnny Depp and Christian Bale. With Bale playing legendary lawman Melvin Purvis one would think that his dogged pursuit of Depp as Dellinger would make for some really riveting movie magic. Think again. The chase in this case is about as compelling as any nondescript action sequence you can find by accident while channel surfing with a TV remote.

Equally-wasted is the rest of a stellar, A-list cast, starting with Oscar-winner Marion Cotillard (for La Vie en Rose) who unsuccessfully tests out a variety of unrecognizable accents as Dillinger’s devoted gun moll, Billie Frenchette. Then we have Billy Crudup who fails to do J. Edgar Hoover justice in an uncharismatic interpretation of the feared FBI founder, and Stephen Graham who comes off as a cartoonish clown impersonating trigger-happy Baby Face Nelson.

And why was an accomplished actress like Leelee Sobieski signed on as an extra? Simply to look pretty strolling briefly down the street on the arm of the ill-fated protagonist? The same must be asked about rising star Channing Tatum, who makes a blink-and-you-missed-it cameo as Pretty Boy Floyd. Ditto for

Giovanni Ribisi, Stephen Dorff and a host of other gifted character actors. The list of disappointing performances is endless.

Accentuating the positive for a moment, what Public Enemies does have to offer is an old-fashioned shoot ’em up for filmgoers who enjoy that sort of mindless mayhem. More cerebral cineastes might find themselves offended by the way in which the production goes out of its way to paint Dillinger as an easy to root for folk hero with a code of honor and a lover that he remained faithful to.

This, unfortunately, conveniently flies in the face of common sense. Truth be told, in real life he was a worthless cop killer and a womanizer who had abandoned his wife for a bunch of floozies. Funny how Hollywood portraits of him have become increasingly empathetic over the years since 1945 when he was originally introduced as a cold-blooded murderer.