A kind of extreme Michael Moore in drag and on Viagra, the brilliantly rude Sacha Baron Cohen embarks on his latest cinematic equal opportunity icon smasher, with all the gusto of a sex-crazed lunatic fringe narcissistic flaming screen queen. Which is exactly his playful in-the-closet sociopolitical weapon of choice this time around, for the deliriously insane pseudo-biopic, sexual politics on steroids mockumentary, Bruno.

Hatched colla-borat-ively from no less than five writers, along with the mad genius macabre mind of Cohen’s regular partner in crime enabler, director Larry Charles as a kind of neo-Frankenstein, the symbolic and otherwise cocky comedy is Sacha’s repeat offender, perverse bid to go global for his latest satirical under the radar maniacal mission. Bruno as self-described aspiring teen Austrian supermodel, is a delusional, sexually ambiguous hilarious megalomaniac who sets the stage for his off-the-chart antics to come, by first scolding humanity for once again ‘turning away the greatest man in the world from Austria’ since Hitler. Even while he eloquently characterizes one of his many raunchy same sex trysts as a bid to ‘make my face pregnant.’ 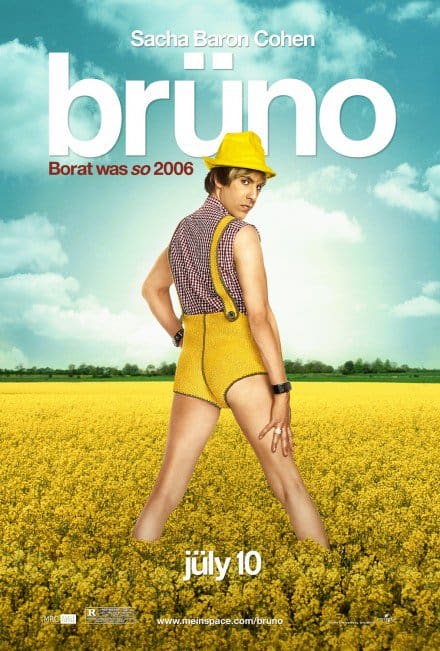 When fast forward fame eludes him on the disapproving European runways, Bruno heads for LA and gets his rectum waxed and bleached, as beauty regimen prep for the dream of ‘becoming the biggest gay superstar since Schwarzenegger.’ Setting up a series of Sacha’s characteristic cons, the movie unveils its real purpose. That is, to mock and expose, literally and otherwise, an assorted menu of American phobias and contradictions, many of which render Bruno’s freakish posturing ironically tame in comparison.

Some of the wildest zany Sacha fame chasing gotcha moments in the movie, among way too many to cite, include setting up an unsuspecting Ron Paul for a hotel suite gay seduction in order to claim fame via leaked sex tape; competing with the likes of Madonna and Jolie for tabloid attention by having an adopted African baby shipped via sealed cardboard carton to the US, as a ‘single parent looking for Mr. Right,’ and which he names O.J.; auditioning that shameless species known as stage parents for a shoot, who don’t mind at all when asked to submit their chubby infants to liposuction, or dress their kids as nazis shoving a Jewish O.J. into an oven; and relocating, while running out of ideas, to Israel dressed as a Hasidim in shorts, in the hopes of getting famous by soliciting Al Qaeda kidnapper terrorists. But assessed as too horny to even be a hostage and getting tossed out instead, after enraging his hosts with his inability to decipher the difference between the words homos and Hamas.

And while running out of preposterous ideas, Bruno finally convinces himself that only straight males can attain celebrityhood. So he visits bible belt gay converters while unable to stop himself from making indecent passes; signs up for the services of a macho martial arts master to attain the art of fighting off multi-colored dildo attacks; and hits on redneck survivalist hunters in the wilderness at his own risk. All of which is wrapped up in a ballsy bid at illegal gay matrimony. Which bestows upon an astonishingly not yet exhausted in the least Bruno the honor of being musically anointed by Snoop Dogg as ‘the white Obama.’ Mission accomplished, and an audience likely felled by laughter overkill.