A kind of Godfather in blue, Pride And Glory combines all those traditional elements of mob thrillers encompassing family values in conflict with criminal ambitions and impulses, but plays out instead on the opposite side of the law. This type of sinister police noir is nothing new, but the story is elevated by the testosterone fueled, gritty intensity of the male ensemble chemistry counting Edward Norton, Jon Voight, Colin Farrell and Noah Emmerich. 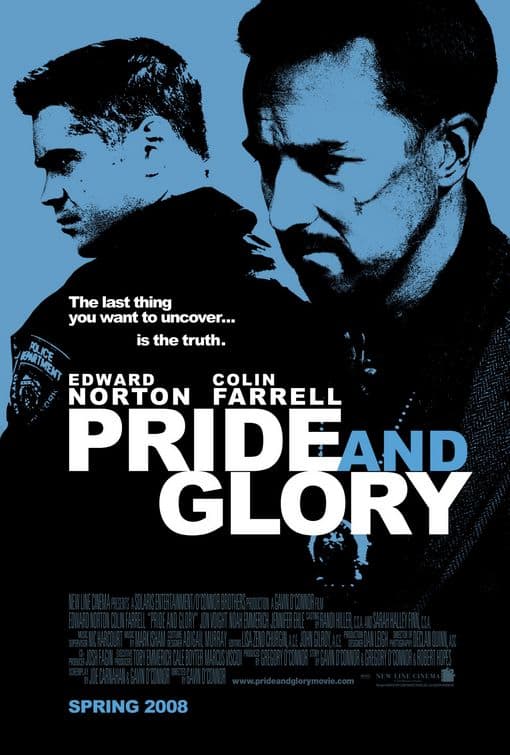 Directed and co-written by Gavin O’Connor (Tumbleweeds) and screenwriter Joe Carnahan (Smokin’ Aces), Pride And Glory focuses on an NYPD investigation in the aftermath of a Washington Heights drug bust gone bad, in which four cops on the stakeout are killed during the ensuing shootout.

An enraged Chief Of Detectives Tierney (Jon Voight) pulls his cop son Ray (Edward Norton) from Missing Persons to head the probe. A far from enthused Ray is reluctant to get involved, since the four dead cops were part of a team that includes his traumatized brother Francis (Noah Emmerich) and hotheaded brother-in-law Jimmy (Colin Farrell).

Though the son of an NYPD cop himself, O’Connor presents a grim portrait of the police as, in their own words in the film, ‘guns for hire who sell our badges to the highest bidder, and who lead our own as sheep to slaughter.’

The incidents taking place in this Northern Manhattan inner city Dominican slum, which bear similarities to actual events reported there in the past, are rife with police corruption, drug dealing and torture tactics inflicted on this terrified immigrant population, and eerily reminiscent of Abu Ghraib.

Pride And Glory is primarily anything but, and this chilling psychological expose touches on a police vocation fraught with a toxic mix of overwhelming stress, self-destructive temptations, danger and dehumanization. And though the narrative rife with brutality and cynicism leads down a path that comes together way too over the top to make sense of it all, the journey there stings with the crushing weight of a raw and devastating emotional power.