The Tierneys are a tight-knit Irish-American clan with a long history of service in the NYPD. Family patriarch Francis (Jon Voight) is a highly-regarded, retired police chief who has preserved his connections to the upper echelons of the department. Frank, Jr. (Noah Emmerich), is an equally-respected precinct commander in Manhattan, while his younger brother Ray (Edward Norton) is a former narc relegated to an inconsequential desk job since an incident in the Mott Haven section of the Bronx that not only stalled his career but cost him his marriage. Their brother-in-law, Jimmy Egan (Colin Farrell), is a covertly-crooked patrolman working under Frank, Jr. whose unlawful ways are about to catch up with him, big time.

Just past the point of departure, the festive Christmas season is abruptly spoiled when four officers are murdered during a drug bust gone bad inside a seedy Washington Heights apartment. Frank, Sr. immediately urges Ray to return to the streets to join the special task force being formed to search for the cop killers, since the men who died were all under his big brother’s command. 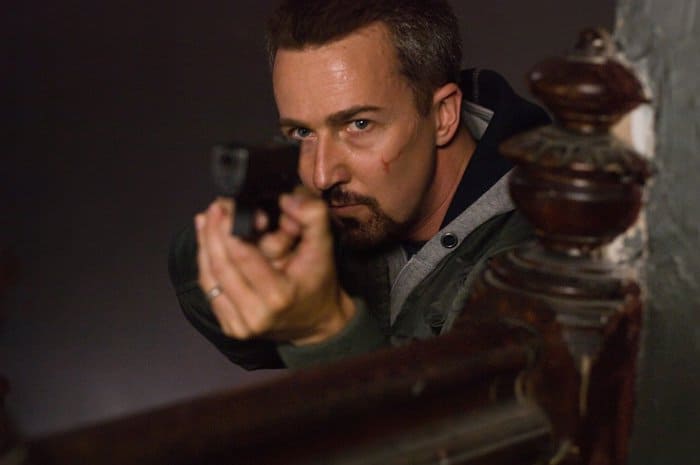 Ray does so reluctantly, though reasonably expecting the trail to lead to some sleazy street punks. But when it instead implicates fellow officers including his own brother and brother-in-law, he finds himself facing a crisis in conscience. For the last time he was in a similar situation, he had compromised his moral code by lying under oath to protect a cop on the take. That’s why he lost the respect of his wife (Carmen Ejogo) and now lives alone on a leaky houseboat. This go-round, the stakes are even higher, for he uncovers a widespread pattern of corruption indicating that the entire precinct might be in cahoots with the mobsters wreaking havoc on the local neighborhood. Then, when he tries to bring the facts to the attention of the department brass, he’s met with the subtle suggestion that they’d prefer for him not to break the Blue Wall of Silence.

So, will Ray play ball and participate in another cover-up, or will he testify truthfully, and thereby risk ripping both his family and the precinct apart? That is the question waiting to be addressed in Pride and Glory, a gritty, inner-city saga directed by Gavin O’Connor (Miracle). This high body-count affair begs to be compared with The Departed but is simply too formulaic and cliche-ridden to measure up favorably with that Oscar-winning Best Picture.

Nonetheless, Pride and Glory was fortunate enough to be blessed with a talented cast, including Noah Emmerich, Colin Farrell, Jon Voight, Rick Gonzalez and Wayne Duvall, that managed to elevate its paint-by-numbers script to an acceptable level. However, Edward Norton is the standout here, turning in yet another inspired performance as the anguished Ray, a complicated soul in search of redemption, and as ready to mix it up with bad guys as to beg his estranged ex for a second chance.

To see a trailer for Pride and Glory,