Fresh from her stint as a spiritual sleuth of sorts in Ron Howard’s The Da Vinci Code, petite and perky actress Audrey Tautou turns up in a different sort of investigative mode, in the tangy French confection, Priceless (Hors de Prix). That is, as gold-digging femme fatale Irene, in pursuit of usually elderly and definitely filthy rich men, in order to support for obsessively calculated extravagant and flamboyant materialistic lifestyle.

During a stay at a luxury hotel with her current aging lover, Irene by chance encounters Jean (Gad Elmaleh), a bartender there whom she mistakes for a guest. In no way wanting to disillusion this luscious hottie, Jean feeds her fantasy of him as another man with lots of money to target and seduce. Even going so far as to arrange a tryst with Irene behind her boyfriend’s back, in the currently unoccupied, most expensive luxury suite. 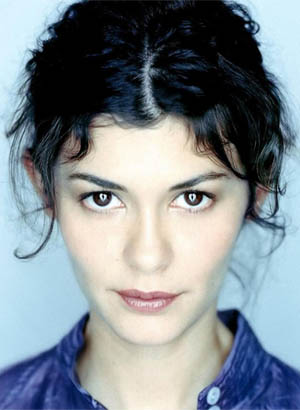 When Jean is outed by the housekeeping staff and she’s tossed out by her boyfriend for her sexual indiscretion, an infuriated Irene takes off for another town on the hunt for a new sugar daddy, and a hopelessly infatuated Jean follows not far behind. And though both find themselves rich, older lovers, with Jean picking up a pointer or two from Irene on how to use sex to milk women for material gain, there’s remorse, redemption and plenty of surprising found love to go around in the end.

Priceless is quite an impressive gem of a movie, however tarnished the flawed protagonists. And its insights into the many ways that money corrupts and dehumanizes emotionally and psychologically, is a sobering reflection on what constitutes genuine fulfillment, and compromised values today.

Audrey Tautou telephoned from Paris to talk about getting a chance to play sexy and naughty in Priceless, immersing herself in kinky fantasies to get into character, and those dress for material success fashion statements she flaunts as man bait in the movie.

Why was Irene a character that captivated you, and that you wanted to portray?

AUDREY TAUTOU: This was a chance for me to play someone I hadn’t played before, so it was strange and fascinating for me. You know, she’s a very seductive person. And she’s very sexy, and likes to use her charms to manipulate guys. So it was nice to discover my…femininity!

Okay…What are your thoughts about the way intimate relationships between men and women are depicted in Priceless?

AT: Well, I think this is all about rich men and poor women, and how these women want to live in that luxury universe. And from my point of view, that’s like modern sexual slavery. Like some guy is paying for their company, even though the women are more interested in their bank accounts.

So in other words, you see the interaction of sex, money and love in this movie as a class issue?

AT: Yes, in a way. Because money changes everything in these relationships. And you can see that old, ugly guys can have these beautiful women. But to do so, they must be very rich.

Now isn’t the title Priceless different in French, and am I mistaken that something is lost in translation here?

What was your approach to playing Irene, whom you make seem much more complex than she is on the surface, and even somewhat sympathetic, even though she’s just after money?

AT: I enjoyed playing this kind of woman, and being sexy and having those sorts of fantasies. You know, to seduce and allow yourself to be seduced. But otherwise, it was…just my job!

It’s easy to find those women in luxury hotels. And they almost always look the same. Very sophisticated, and very elegant in their appearance, with their nails, their hair and their suntan.

Now, I don’t think she’s like a prostitute or anything. Of course, she sleeps with these guys. But I feel she just thinks that money and possessions will bring her happiness.

Do you think women in general as they’re portrayed in movies, including your character, are a reflection of the sexist fantasies of male directors?

AT: I never think about it, and I don’t really care about it, in fact.

You’ve achieved such a huge amount of success in so little time. you’re still very young. And you’ve already been in a big Hollywood production, The Da Vinci Code. So how do you feel about your life journey so far?

AT: Well, I feel like I’m sixty. Joking! No, I think many things happened to me very quickly. So I was lucky to experience all this. And I feel that I could stop right now, and be very happy with the career I’ve had.

Audrey, you have an upcoming movie, in which you play Coco Chanel. That was a remarkable women. She revolutionized women’s fashion forever in the early 20th century, liberating them from petticoats and corsets and adding more masculine freedom of movement in clothes, as well as the completely physically and psychologically innovative flapper look. Yet, she was also condemned as a woman who, somewhat like your character in Priceless, traded in her moral principles to gain favors romantically from the Nazis in WWII France. Why are you excited about playing her in a movie?

AT: I don’t know, I feel there is something in common between her and me. I’m just interested in discovering things about her, because she was an amazing French woman. And very talented and tough, and who had this amazing life.

What do you feel you have in common with her?

AT: I’m going to just keep that cooking in my mind for now. I feel it’s too early for me to be precise, and to talk about that.

Speaking of fashion, fashion statements play quite a role in Priceless. So what do you think about the unique clothes you wear in this movie?

AT: Well, the clothes are very important. Because the bright clothing is how she can be noticed by men, and be charming and sexy. And so what we wear is the shell of who we are.

Now, I hear that one of your favorite poets is Baudelaire. Why is he special to you?

AT: His writing is so sensitive and clever, and wonderful. I don’t know, it’s poetry, pure poetry. So…it’s impossible not to love him!