Back in the Seventies, when black and Latino teenagers from the Bronx first began gyrating wildly and spinning on their heads on pieces of cardboard to hip-hop beats emanating from thudding boom-boxes, I doubt if anybody expected the street fad to last. But breakdancing has not only flourished, but it has spread around the planet like wildfire, finding even greater acceptance in Europe, Asia, Africa and the Middle East than in its birthplace.

Over the years, the mesmerizing choreography has become increasingly complex, incorporating eye-popping acrobat feats into its gravity-defying routines. Today, it really ought to be an Olympic sport, since it has spawned numerous competitions, most notably, the “Battle of the Year” which features elimination rounds in 23 countries en route to the big finale. 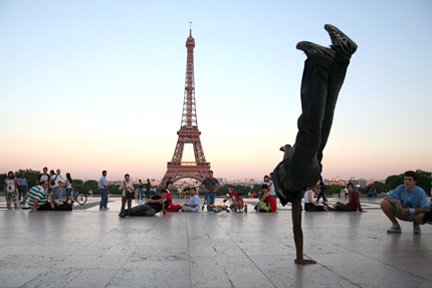 With breakdancing now mainstream, it only makes sense for it to be the subject of its own documentary, rather than remain a cinematic sidebar seen in snippets the way it was briefly featured in flicks such as Flashdance or Zoolander.. Directed by Asian-American Benson Lee, Planet B-Boy is a joyous celebration which traces the history of freestyling while simultaneously showcasing the talents and personal lives of some modern-day practitioners coming from places as diverse as Korea, France, Germany and Japan.

An exhilarating homage which deservedly elevates the rubber-limbed performers to the level of world-class gymnasts. And to think that this internationally-embraced dance form was started somewhere in the ghetto by a poor kid with nothing more than a radio and an unbridled passion for self-expression.