The story dawdles its way through endless fluff, the attempts at comedy are dire, it’s bogged down with fatuous dialogue recited by brunette mermaids (yeah, right) and a chorus of actors in very bad wigs. This is cinema at its dreariest and the expensive 3D production does nothing to save it.

Jack Sparrow (Johnny Depp) has memorized a map that leads to the Fountain of Youth. He gets captured by the British and encounters Barbossa (Geoffrey Rush) who informs the pirate that he too knows about the secret Fountain. Jack manages to escape but is captured again by Blackbeard (Ian McShane) and Angelica (Penelope Cruz) who force him to lead them to the treasure that others seek.

The main storyline, the quest for the Fountain of Youth, is a simple enough idea, but it gets bogged down by a jumble of sub-plots that make little sense. Apart from the non-romance romance between Jack and Angelica, there’s a personal battle between Barbossa and Blackbeard, an unexplained attack by a band of Spaniards and a romance between a missionary and a mermaid. The latter tries to be deadly serious which, in the middle of so much piffle, is painful. It’s hard to say which of these silly ideas contribute least to the film and which slow it down most as they all do both with aplomb. 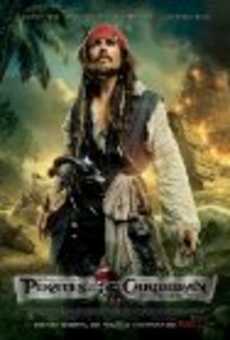 When there’s no drama, no depth and no tension, the only thing left to entertain are funny lines, but this film contains none and, to make matters worse, the writers TRY to be funny. A typical attempt at humor is “I can point names and name fingers”; another is a missionary joke (yes, it gets that desperate) which makes me wonder if the missionary character has been put there just for this purpose.

There’s absolutely no one to like in this film. Johnny Depp slurs his lines, which is extremely irritating, Ian McShane is mostly wide-eyed, Geoffrey Rush tries to look wise and Penelope Cruz does nothing at all, but this is possibly because wearing a frilly blouse and trailing skirt on a pirate ship in the middle of a mutiny is always going to make movement difficult. But I doubt any of these actors, or the writers, are too worried what happens to this film as they’ve already been paid millions and, if it flops, the joke’s on Disney. Fingers crossed they see the funny side.