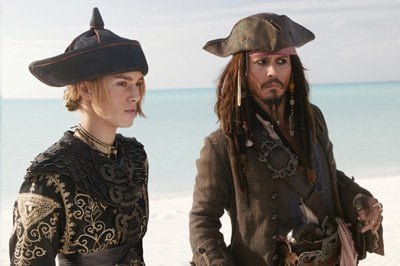 Who cares that a summer blockbuster might be an incoherent, overplotted mess, when it comes stocked with a charismatic protagonist, an intriguing love triangle, plus enough swashbuckling action and spooky special effects to make you forget the fact that the story is almost impossible to keep straight? That’s what we have with Pirates of the Caribbean: At World’s End, possibly the finale of Disney’s billion-dollar trilogy, unless the company can coax Johnny Depp to have another go at it as Captain Jack Sparrow.

When last we saw the terminally-eccentric skipper of the Black Pearl, he and his ship had been dragged to the bottom of the ocean by the Kraken, a mammoth sea monster doing the bidding of dastardly Davy Jones (Bill Nighy). In the interim, piracy has turned into a rather perilous profession, due to an unholy alliance between Jack’s tentacle-faced tormentor and Lord Beckett (Tom Hollander), the Chairman of the East India Trading Company.

With Beckett now in control of The Flying Dutchman, Jones’ ghoulish ghost ship, the invincible vessel has been ridding the Seven Seas of pirates. So, as the film unfolds, we are greeted with the spectacle of the mass hanging of hundreds of convicts condemned to the gallows.

Meanwhile, a plan is being hatched by Will Turner (Orlando Bloom) and his fiancee, Elizabeth Swann (Keira Knightley), the fetching femme fatale responsible for seemingly sending Jack to a watery grave. With the help of Captain Barbossa (Geoffrey Rush) they encourage the rest of the outlawed Lords of the Brethren Court to put aside their differences to rescue him and thereby to resuscitate their flagging brotherhood of thieves. 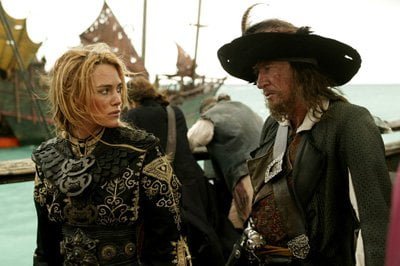 Also among the ill-fitting crew of conspirators assembled for the adventure are the mischievous Pintel (Lee Arenberg), the superstitious Ragetti (Mackenzie Cook), and Tia Dalma, aka Calypso (Naomie Harris), a West Indian witch whose clairvoyant persona was ostensibly channeled from Miss Cleo of the Psychic Friends Network. Yet, none from this colorful ensemble can match Cap’n Jack in terms of magnetism, for his concatenation of tics still steals his every scene, even opposite his father, played by the Rolling Stones’ Keith Richards, who Depp freely admits served as the source of inspiration in creating the character.

Since Pirates 2 and 3 were shot simultaneously, fans of the franchise are forewarned to anticipate a sense of deja vu while watching this flick. Although the scenes are certainly original, there remains a vaguely familiarity air about it all, similar to the experience offered by the final installment of Lord of the Rings.

In sum, At World’s End is a CGI-driven, seafaring saga of Shakespearean proportions, exploring an assortment of themes worthy of The Bard of Avon: love and betrayal, good versus evil, failing and redemption, and more. Unfortunately, it spins a far more convoluted yarn than its demographic desires, a flaw further complicated by a glut of both good guys and bad guys to keep track of. 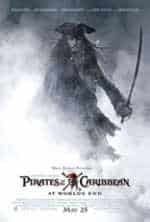 Best to think of Pirates 3 as just a Johnny Depp vehicle to be savored as a mindless, mildly scary escape. Just be sure to sit through the entire closing credits for a postscript which ties up loose ends while dropping a big hint about what might be in store should there be a Pirates 4.