If an amateur writer was going to write a script about a killer fish, these are the things he would not do :- 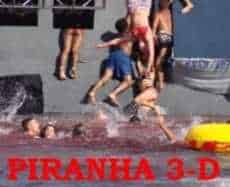 Piranha 3D is set in Lake Victoria, a sleepy resort town with a population that explodes each year when 50,000 teenagers descend for Spring Break. A lone fisherman reels in his catch in the middle of the lake but his boat capsizes, he gets thrown into the water and attacked by something from below. Meanwhile, the Chief of Police leaves her elder son in charge of his younger siblings and goes to work. She discovers the body of the lone fisherman, threatens to close the lake, seeks the advice of a fish geek, aka Richard Dreyfuss, and then goes out on the police boat to investigate.

Unlike the 3 Dimensional format it was shot in, all the characters in this film have only one. The sweet teenager, the sweet love interest, the demanding film producer and the divorced mom trying to juggle job and family. And if all that’s not fake enough, wait until you see the blood. They got the color wrong and it looks more like a fashion accessory than someone’s life seeping away.

As the story moves into the latter stages, two different situations are set up; one is on a boat and the other by the shore of the lake. There are a couple of moments on the boat when real tension is created but the shoreline situation is silly from beginning to end. When the piranhas attack, hundreds of teenagers scream and flounder and stagger ashore, but all they really had to do to escape was to run like hell. These scenes go on for absolutely ages, cut back and fore to the boat, kill tension at every turn and get so repetitive that viewing becomes mundane; losing the impact of death in a grisly horror movie is really very careless.

This film plays like a B Horror movie, despite its brilliant piranha concept and $25M budget. The 3D is of course stunning, but a weak script in an expensive format is rather like wearing an Armani jacket over a grimy dress; it’s nothing but flash, won’t fool anyone for long and what folks back home used to call fur coat and no knickers.