At first blush, Phoebe Lichten (Elle Fanning) looks like your normal nine year-old. Sure, the precocious fourth grader tends to frustrate her teachers by talking out of turn in class, but that disruptive behavior might easily be deemed as natural for any curious child with a creative mind. Granted, such impulsive outbursts are nowadays deemed Attention Deficit Disorder and treated with a little Ritalin by adults inclined to medicate rather than tolerate a kid who can’t seem to sit still.

Phoebe’s case proves to be a little more complicated than just nervous energy when her acting out escalates to obsessive-compulsive tendencies and spitting on classmates while playing tag on the schoolyard. This incident lands her in hot water with the principal (Campbell Scott) who informs her parents (Bill Pullman and Felicity Hoffman) of the infraction.

However, their well-meaning, if perfunctory intervention proves to be ineffective, as Phoebe ends up in counseling with a lame shrink (Peter Gerety) who snap-diagnoses Tourette’s Syndrome as the source of her outbursts, even though that condition doesn’t really explain all of her symptoms. 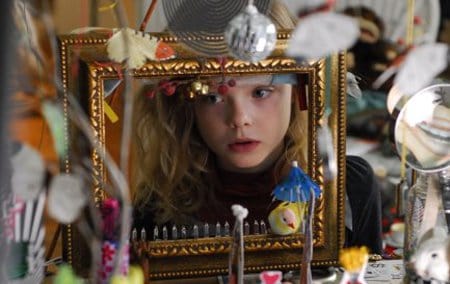 Tragically, Mrs. Lichten is too busy to give Phoebe all the attention she needs, being already stretched thin between writing a book about Alice in Wonderland and finding quality time for her other daughter, Olivia (Bailee Madison).

As fate would have it, a guardian angel appears in the person of a drama teacher (Patricia Clarkson) whose protective instincts kick-in when she senses that Phoebe’s a kid in crisis. So, sympathetic Miss Dodger decides to cast her in the title role of the next school production which just happens to be Alice in Wonderland.

Unfortunately, Dodger’s openly encouraging Phoebe’s flights of fancy during rehearsals only seems to accelerate the deterioration of the girl’s mental condition. Soon, we find the child further and further divorced from reality, and engaging in conversations with the White Rabbit, the King of Hearts and other characters she starts imagining from the Lewis Carroll classic.

So unfolds Phoebe in Wonderland, a serious examination of mental illness which doesn’t offer any pat answers or serve up a syrupy sendoff. Written and directed by Daniel Barnz, the picture is worthwhile for the powerful performance of Elle Fanning alone, an emerging star steadily rising out of her sister Dakota’s shadow. Elle is unusually adept here at holding you in her thrall while conveying both the innocence and the angst of a desperate adolescent trapped inside of a brain gradually coming apart at the seams.

To see a trailer for Phoebe in Wonderland,