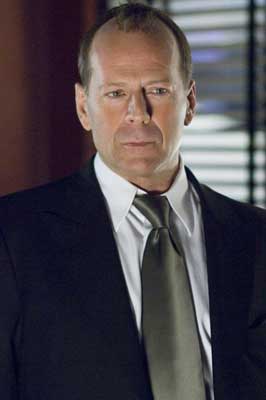 Until she quit her job, Rowena Price (Halle Berry) was an investigative journalist at the New York Courier. But she left the daily newspaper to preserve her integrity right after her boss (Richard Portnow) decided to kill a shocking story she was about to break about Senator Sachs (Gordon MacDonald), a “family values” Republican she’d caught in a compromising position with a male intern.

The intrepid reporter’s retirement to her spacious, Christopher St. apartment in trendy Greenwich Village turns out to be short-lived, since she’s soon summoned to the morgue to help identify the body of her a murder victim. And when Rowena rushes from the refrigerated room to regurgitate, we know that corpse is, indeed, that of Grace Clayton (Nicki Aycox), her best friend since childhood.

The two had grown up as next-door neighbors and remained close until recently, when their relationship become strained after Grace slept with Rowena’s on-again/off-again boyfriend, Cameron (Gary Dourdan). Posthumously, their life-ling bond proves stronger than any beau, because Rowena opts to investigate the grisly killing without even involving the police.

Instead, she enlists the assistance of Miles (Giovanni Ribisi) in this endeavor, a computer whiz who can barely hide the secret crush he has on his brainy and beautiful colleague. The two quickly discern that Grace was having an affair with Harrison Hill (Bruce Willis), a married advertising tycoon with a wandering eye and a very jealous spouse, Mia (Paula Miranda). Due to her hubby’s history of infidelity, Mia handpicked his assistant, Josie (Daniella Van Graas), a lipstick lesbian she thinks she can count on to shadow his every move at the office for her.

Certain that the solution to the mystery is hidden somewhere inside the Hill empire, Rowena adopts an alias and takes some temp work at the ad agency. Her plan is to seduce the weak-willed CEO into making an incriminating admission by sending him flirtatious instant messages from the other side of the office. 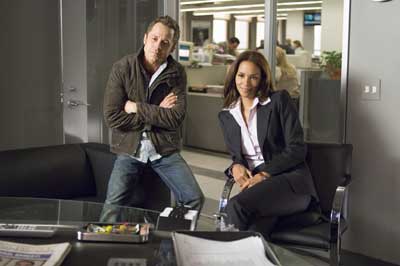 If only the balance of Perfect Stranger measured up to this promising premise, but unfortunately, the picture falls apart soon after this captivating point of departure. Not even the squandered screen chemistry or considerable star power of Halle Berry and Bruce Willis could save a flick relying on a script so infuriatingly convoluted and patently unfair to its audience.

The essential problem is that the overplotted production introduces too many characters, especially given that virtually every one of them might be a suspect. Laced with an abundance of rather obvious red herrings, the twists and turns actually could have been laughable, had the picture been pre-packaged as a deliberately mediocre, tongue-in-cheek homage to bad detective flicks of a bygone era. 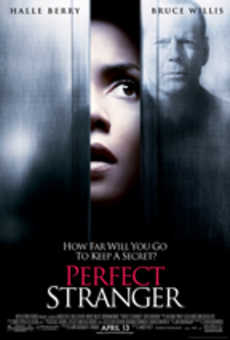 However, this pretentious whodunit plays it straight, and ends up indistinguishable from any of those formulaic, made-for-TV crime dramas you’d channel-surf past without a second thought. Since it would still be unfair to share the jaw-dropping resolution of this rabbit-out-of-the-hat headscratcher, just be forewarned that that the film offers next to no clues as to what’s coming except when hastily divulged during the denouement almost as an afterthought.