This film is billed as a comedy drama about a failed novelist (Richard), his successful wife (Claire), and a troubled 17 year old girl (Amy). Both the middle-aged novelist and the young girl are in possession of an imaginary friend and it is ostensibly this commonality that brings the two odd balls together, which is where Paper Man takes its fatal dive. Of the three main characters, the only one powerful enough to keep this humdrum story alive is Lisa Kudrow, but she has comparatively little screen time and, without her, scenes just trundle by on their inevitable journey to DVD Land.

The story is based around Richard’s writers’ block, which has been done so many times it’s a worry before the curtain even goes up. Why does anyone think we want to watch an actor procrastinating in front of a blank screen? This is about as interesting as watching a woman gives birth, but at least with the latter you know you’re guaranteed an outcome. And why Claire wants Richard to write, and why Richard wants to write, is a complete mystery. He’s well into his fifties, has had one book published which didn’t sell a single copy, and now he can’t write another word. We are never told what he’s done with the rest of his working life but if it took him thirty years to produce the first disaster I’m not surprised progress is rather slow. 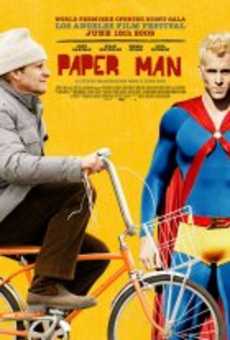 Another reason to switch roles and make Claire the one to befriend the teenager would be to avoid that uneasy feeling when a young girl and a man old enough to be her grandfather get together. I know, I know, one shouldn’t automatically assume because he’s a guy he’s going to be tempted by young flesh and embarrass himself and her by hitting on his young victim, but there’s always that outside chance, isn’t there? In the same vein, if the roles had been reversed, we would have expected the young guy to want to have sex with the older woman, which isn’t necessarily what you want to see but at least the thought isn’t quite so disgusting. And in case you’re wondering, Richard got drunk to make his play and denied it the next day, but once sex is on the table whatever other kind of connection you get seems like second prize.

And now we have to deal with the imaginary friends. Abby’s is a boy her age and for most of the time it appears he’s real which stops us from thinking that she’s completely alone and as she shows him little sympathy we have less for her. Richard’s, on the other hand, is dressed like superman and is so incongruous an explanation is needed but never given. These celestial beings are never integrated into the story and, as conduits for the characters’ internal dialogue, are vastly underused. The goal for both Richard and Abby could have been to get rid of the specter in their head but instead this exorcism is more a side effect and the only one with a clear goal is Clare, who wants her old man to get his act together.

What always baffles me when I watch films like this is why they’re billed as ‘comedy’ drama. Perhaps the appearance of Superman is supposed to be funny, and there were a few other equally bizarre moments but I honestly don’t remember anyone rolling in the aisles.

Equally baffling is the filmmakers’ claim that the message in this film is about growing up, but Abby doesn’t seem particularly immature for a 17 year old and Richard doesn’t seem particularly childish; his wife cutting up his food and feeding him means that she needs to change, not him. So the only message I got left with is that if you’re a writer, and the best you can come up with is an idea about a writer who has writers’ block, trust me, as ideas go, you’re clean out of them.