There are some compelling facts in this documentary, but not nearly enough, and what there are are so bogged down by social media trivia that no room is left for a cohesive story to be told, which is something of a paradox as this is a narrative about one of the most high-status newspapers in America. When the bar is set that high, we expect better.

For many years the New York Times was able to sell their newspaper to the public for less than it cost to print because their income was subsidized by revenue from advertising. As readership moved to the internet, so their appeal to advertisers waned and thus their fight for survival began. This film debates the future of newspapers and the filmmaker spent a year in the NYT offices, uncovering some good and some not so good events that have brought the NYT to the place where it is today. 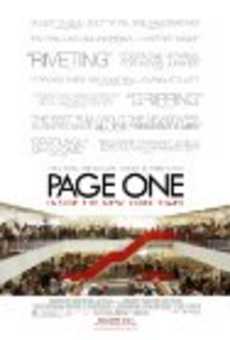 Judith Miller, an ex New York Times journalist, published many articles in the early 2000s which stated there was absolute proof that Saddam Hussein was amassing WMD. When Ms Miller was interviewed about her erroneous claims she admitted with a silly smile that her reports were incorrect because the sources she got them from were incorrect. Hopefully this hack now spends her days blogging, which is clearly more suited to her talents than writing front page headlines for prestigious newspapers.

When Wikileaks released thousands of pages of confidential documents the NYT made a deal with Julian Assange to publish excerpts from them on nine consecutive days, which is essentially second hand news. When the government announced they were withdrawing troops from Iraq, the NYT considered waiting to see what NBC broadcast before they published their version, which is technically hearsay. None of this is the kind of reporting that made journalism great but, on the other hand, it did increase the NYT’s chances of getting their facts right.

The NYT now charge readers to view most of their newspaper online but what is glaringly absent from this film is whether or not this has paid off. As this can’t possibly be an oversight, the conclusion must be that very few readers actually coughed up and the newspaper is worried that if this gets out, they might lose the precious few they have. This is, of course, understandable, not from the NYT’s point of view, but the readers, who are probably reluctant to pay for sloppy reporting and information they can get elsewhere or by catching the 6 o’clock news. However, this film does prove beyond doubt that there is indeed a case for the continuing existence of newspapers but, for obvious reasons, not this one.