Heaven may be where probably every bride would like to be on her wedding day. Unless, of course, you’re Eva Longoria in Over Her Dead Body, who ends up there literally while prepping for the festivities on that fateful day. Not that her character Kate is without sin when she steps into the afterlife, following a deadly encounter with a decorative ice sculpture that falls on top of her while she’s putting the finishing touches on her ceremony. Rather than perfect, Kate is more a perfectionist, which basically means that she gets on everybody’s nerves demanding that each and every task be done just right – including that ice sculpture – before her untimely relocation into the next world. And bossy nag that she is, Kate is still determined to call the shots on planet earth from her perch in the afterlife, especially when it comes to still being possessive over her former vetinarian fiance, Henry (Paul Russ). 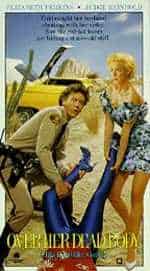 Over Her Dead Body gets off to a rather sluggish, aimless start, veering into all sorts of distracting subplots like bumbling psychic Ashley (Lake Bell) summoned to assist the inconsolable Henry to communicate with his departed bride, Ashely’s day job as a caterer along with her accident-prone gay helpmate (Jason Biggs), and the wacko furry nuthouse that serves as Paul’s clinic. With a story that initially seems as if it’s got nowhere to go while going everywhere, Longoria steps in to take charge – both as a character and an actress – and saves the day.

And so the real mischief kicks in when Ashley lures Kate back to planet earth with more accidental than nifty hocus pocus, and Kate immediately senses that there’s some sexual chemistry brewing between Ashley and Henry. And since Kate has lugged all sorts of personal baggage with her on her excursion to heaven, in particular her separation anxiety issues related to relinquishing Henry to another woman even if she she can’t have him, there seems to be, you might say, hell to pay.

So begins a really fun cat fight between these two sorta rivals for Henry’s heart, and with Kate definitely in the lead at all times, even though she doesn’t have the slightest chance of victory. So the most pressing issue becomes, will Eva Longoria learn to share her man? No, not that one! In summation – and in stark contrast to similar afterlife romantic comedies like PS I Love You that take themselves far too seriously – Over Her Dead Body and that not so dearly departed get-even babe make for a wild and wicked romp, through this life and the next.