A fifteen minute short with the heart and soul of a full length feature film, One Love is actually the story of many lovers, but all, except one, with a singular shared intense passion – to have a child. Director DJ Matrundola, clearly a master of concise dramatic brevity, has infused his collection of four intertwined vignettes about pending parenthood with uncommon sensitivity and eloquence that is astonishing to behold.

The stories of four pregnancies that touch the lives of its characters in vastly different ways and converge by chance at the same hospital, One Love begins in a pub where a very drunk and angry young woman (Vanessa Matsui) goes into labor after sliding off a bar stool.

A Good Samaritan (Jon-Paul Khouri) escorts the woman nearly against her will to the local hospital where one anxious infertile couple is arriving to finalize an adoption, and another awaits with euphoric anticipation the birth of their first child in the delivery room. And in an initially comical interlude, yet another expectant couple waits in the emergency ward to seek medical attention for the husband’s nosebleed. Which is being temporarily controlled with, well, his wife’s tampons. 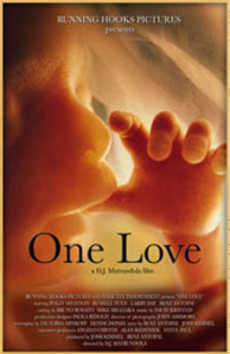 A lyrically crafted journey that evolves as spontaneously as the flow of life itself, One Love is a seamless crystallization of all those casual chance encounters along the way that comprise the mystifying agony and ecstasy of human destiny. And undeniable evidence that less can indeed be miraculously more.