While serving as the President’s (Aaron Eckhart) personal bodyguard, Mike Banning (Gerard Butler) grew very close to the First Family. During his tenure at the White House, the dedicated, detail-oriented Secret Service agent also familiarized himself with every aspect of the building’s layout.

Nevertheless, Banning was reassigned to a desk job after failing to rescue the First Lady (Ashley Judd) before the presidential limo plunged off a bridge into an icy river en route to a Christmas party. Although the accident wasn’t his fault, he was left agonizing over a snap decision that might have been the difference between her living and dying. 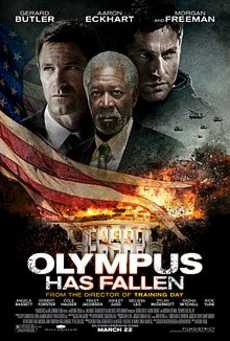 A year and a half later, we find Banning still riddled with guilt despite receiving assurances from the Secret Service Director (Angela Banning) that there was nothing he could have done. However, he soon gets that sorely needed shot at redemption when a swarm of ninjas from North Korea attack the White House, taking the President and his Cabinet hostage.

With the President and Vice President (Phil Austin) abducted, the line of succession dictates that the Speaker of the House (Morgan Freeman) assume power from a well-fortified bunker. Meanwhile, the maniacal leader (Rick Yune) of the bloodthirsty terrorists proceeds to torture his hostages, hoping to learn the codes controlling America’s nuclear arsenal.

The unfolding crisis is not lost on Banning who observes the slaughter of his former colleagues from an office window across the street. The disgraced agent springs into action and surreptitiously enters the White House armed only with a handgun and a walkie-talkie. But he still enjoys the advantage over an army of heavily-armed intruders by virtue of his knowledge of the premises’ every nook and cranny.

Directed by Antoine Fuqua, Olympus Has Fallen is a derivative action flick which might be best described as a cross of Die Hard (1988) and In the Line of Fire (1993), except that instead of Bruce Willis or Clint Eastwood, we have Gerard Butler playing the invincible, two-fisted protagonist. The fast-paced film is engaging and entertaining enough to come recommended provided you’re willing to put your brain on hold and not question any of the picture’s implausible plot developments.

Featuring pyrotechnics worthy of a 4th of July fireworks display, Olympus Has Fallen is an eye-popping, patriotic, high-octane adventure that leaves no doubt about who’s the vindicated hero that kept the world safe for democracy. The Butler did it! Gerard Butler, that is.

In English and Korean with subtitles

To see a trailer for Olympus Has Fallen: