Not exactly girl gladiatorial mud wrestling on display for attentive male audiences, Obsessed expands on Fatal Attraction’s 1987 women’s movement backlash, feminist phobic theme park antics on screen back then, to take on unspoken social entitlement issues. Though race, in stark contrast to Obsessed screenwriter David Loughery’s inflammatory Lakeview Terrace last year, this time around is quite the elephant in the room.

Idris Elba is Derek in Obsessed, the upwardly mobile formerly flirty corporate exec with a fondness for dating down as an office player into temporary temp assistant flings. Though he’s more recently settled down with one of them, his wife Sharon, played by Beyonce Knowles. Who in an odd role reversal, has now switched it up from playing somewhat obsessed, outside looking in extra-marital lover Etta James to Adrien Brody’s music mogul Leonard Chess, in Cadillac Records. 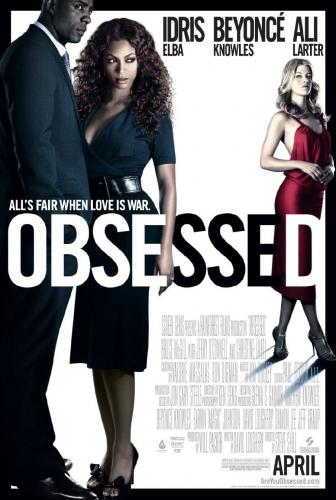 Derek has sworn to a not entirely trusting Sharon, to put a leash on his libido for good now, by hiring only male assistants. But when his current underling falls ill, bottle blonde sexpot in heat with boundary issues Lisa (Ali Larter) shows up to fill in, when not making a far from subtle play for her much too diplomatic boss. And with Lisa’s tendency to not take no for an answer, she’s eventually invading his McMansion in a pathological when not pathetic bid to replace Sharon in his life, despite the involuntary object of desire’s utter revulsion at her every move.

Obsessed bypasses race as a hot topic, and opts instead for the pitfalls presenting themselves to the newly upwardly mobile African Americans, where male power in this case may serve as the ultimate female aphrodisiac. At the same time, the main threat posed by black women, is not earning more than a brother, but a desire to temp motherhood while pursuing career fulfillment equal to a male mate, as in the case of Derek’s raging redhead, too tired for sex, vocationally driven spouse, much to his dismay.

But these potentially intriguing issues are barely glimpsed and set aside in the movie, for seductive Dirty Martinis, a ludicrous male date rape episode (can this really be pulled off without dropping some Viagra into the doctored cocktail too?), two working class women getting down and dirty over an upscale alpha male, and an apparently incurable case of stalkeritis that hopelessly baffles even the police.

In any case the deplorable subliminal subtext here, quite antithetical in the age of Obama, seems to be that women are highly toxic creatures out to hunt down and subjugate men, and that white sense of entitlement can be dangerous to your health, no matter what your position on the economic food chain, or theirs.

Obsessed: I did not have sex with that woman. She had sex with me.