Egghead superheroes can also come in small packages, and with more abstract issues to conquer on the planet than simply vanquishing cartoonish villains. Such is the case of the freakout indie satire, Noise. Tim Robbins goes unusually insane and ready to rumble in Noise as David Owen, a nervous wreck New York City lawyer so disoriented by the constant loud street sounds all around him that the rest of us have long been resigned to – especially car alarms – that sleep and sex are quickly becoming a thing of the past in his discombobulated life.

A sort of high IQ Bernie Goetz urban vigilante of the 21st century, Owen slowly evolves from bitter and resentful, to repeat offender jailbird, to outright vehicular terrorist self-dubbed The Rectifier, according to the nifty calling card he leaves behind with the assortment of car wrecks. In need of way more than anger management, Owen takes to packing assault tools in his attache case and prowling around after dark smashing up cars whose alarms won’t quit. When his patient wife (Bridget Moynahan) eventually gets fed up and tosses him out, this wacko superhero of silence takes up with a fetching, far too young free spirit (Ekatrina Filippovna) who works for his noisy neighbor, but switches affiliations when she sees in the fury of this over-the-hill extreme avenger, a sexy stud.

Not just all about erotic attraction and flesh therapy, there’s also some kind of philosophical rapport between this rebel odd couple never quite comprehended by his ex-wife. In particular when Owen talks Hegelian dialectics as his guiding light, and she in turn conjures the Sirens of yore and Odysseus in auditory bondage from their racket, as the ultimate in muses. There’s also a devious NYC mayor (William Hurt) on hand to offer Owen a choice between having the Patriot Act thrown at him, or join the crafty head of government in ruling the world. But Owen’s got other stuff on his mind, like fashioning the grooviest noise-mobile around for a little payback, with the help of a local mechanic, and collecting signatures for a car alarm initiative on the ballot. That is, until a gabby government clerk accidentally tips him off to former Mayor Rudy Giuliani’s notorious Charter Revision Initiative, that was established expressly to henceforth preempt and cancel any undesirable mass initiatives on the table. 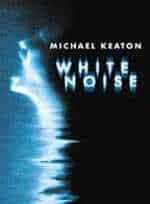 Like The Rectifier himself, Noise, by writer/director Henry Bean (Basic Instinct 2, The Believer, Internal Affairs) is dressed up in a whole lot of rage, but with not much of anywhere to go. But there’s a spunky spirit to the proceedings that can’t be denied, with an implicit refrain that goes something like, pedestrians of the world, unite. Move over Iron Man, a brainier heavy metal menace has arrived.