Besides J.K. Rowling, Nicholas Sparks is the only contemporary novelist to have a book remain on the New York Times best seller lists for longer than a year. While Ms. Rowling has been publishing her phenomenally-successful series of fanciful Harry Potter children’s tales, Sparks made his fortune by cranking out over a dozen romantic tearjerkers, set mostly in the South, each punctuated with rabbit-out-of-the-hat plot twists designed to tug on his readers’ heartstrings.

Three of his works have previously been turned into movies: Message in a Bottle (1999), A Walk to Remember (2002) and The Notebook (2004). Now, Nights in Rodanthe is the latest of his bittersweet soap operas to be brought to the big screen. Fans familiar with the source material, however, are likely to be surprised at how the original storyline has been tweaked by scriptwriter Ann Peacock (Kit Kittredge). 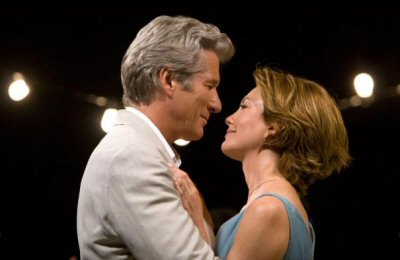 Directed by George C. Wollfe (Lackawanna Blues), the film reunites Richard Gere and Diane Lane who first appeared opposite each other in The Cotton Club (1984), and then again in Unfaithful (2002). Other than crow’s feet caught on close-ups during their steamy clinches, it doesn’t look time has aged either of these matinee idols much, or diminished their ability to generate chemistry.

At the point of departure, we’re introduced to Adrienne Willis (Lane), a married woman in the midst of a meltdown. We learn that just in the past few months, her father has died, her husband (Christopher Meloni) has dumped her and changed his mind, and her spoiled-rotten teenager (Mae Whitman) has become impossible to live with.

Luckily, Adrienne’s best friend, Jean (Viola Davis), owns a bed and breakfast on Hatteras Island located right, I mean, right on the ocean along North Carolina’s Outer Banks. Needing to go to Florida on business, Jean offers Adrienne the comfy place for a little rest and relaxation on the condition that she also serve as caretaker to the only guest she’s expecting, a surgeon arriving from Raleigh for a four-night stay.

Turns out, Dr. Paul Flanner (Gere) has his own emotional baggage, being inconsolable ever since a patient (Linda Molloy) accidentally died on the operating table. He also has some issues to work out with a 28 year-old son (James Franco) he hasn’t spoken to in a year.

What happens when two troubled souls in search of a little solitude find a soul mate instead of isolation? This is Paul and Adrienne’s predicament as they conveniently fall in love at first sight at the idyllic retreat and start whispering sweet nothings in each other’s ears while sharing the proverbial candlelit meals and long walks along the shore. All this unfolds during the off-season, so there shouldn’t be any annoying disturbances on the deserted isle spoiling their heavenly hideaway, provided the approaching hurricane and the disgruntled family of Dr. Feelgood’s deceased patient decide to cooperate.

Visually-enchanting, Nights in Rodanthe is ultimately more memorable for its cinematography than for the myriad relationship dramas hastily introduced and unconvincingly resolved over the course of one very eventful weekend.

That’s the trouble with trying to condense a 250-page novel into a 90-minute movie. You tend to sacrifice character development in order to cram in all the plot points.

To see a trailer for Nights in Rodanthe,