On rare occasions, a title can make or break a movie. And the eleven collaborating directors of New York I Love You (minus Scarlett Johannsen and Andrei Zvyagintsev, who seem to have sensibly bolted) may indeed harbor a genuine affection for the Big Apple. But more to the point is, New York do I know you.

Quantity is not necessarily quality, or rather familiarity. So basically, you’re no Scorsese or Woody, however intriguing or fanciful the geographically generic journey of most of these filmmakers. And tourist impressions of this unique city just won’t do. Which is pretty much in keeping with the groan reflex also experienced by New Yorkers when advised in countless movies lately, that Toronto can easily fill in as this town, no big deal. Sorry, poor imitation knockoffs of this one and only metropolis, just won’t do.

In any case, the film is so hermetically conceived when it comes to its characters, that a sense of place is deemed secondary. And if one suspends disbelief about that whole New York conceit, the vignettes range from mildly humorous to relentlessly tedious, as the seemingly endless ‘look at me’ vanity procession drags its feet along to the credits.

Not to mention, with barely any room for these stories to sufficiently breathe, there are additional creative constraints placed on all the directors, and it shows. And that burden is ultimately shared by the audience as well. Those ground rules, which have been conceived as a series of globetrotting productions-in-progress, include time limits of no more than two days of filming, and seven days to edit. At the same time, each filmmaker must connect his segment to all the others, in order to effect smooth narrative transitions within the entirety. Stopwatch, please. 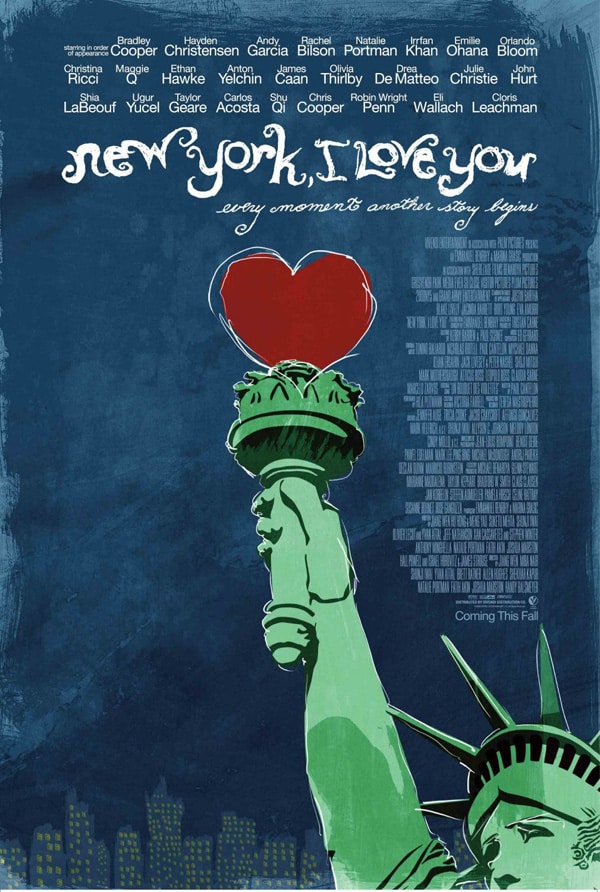 Attempting to set the stage for these attention deficit disordered, unfocused story lines, is Jiang Wen’s baffling encounter conjured between a nervous pickpocket stalker (Hayden Christensen) and his target (Rachel Bilson) in a downtown bar. Her boyfriend (Andy Garcia) eventually stops by the pub, but fails to shed further light on the annoyingly enigmatic proceedings.

Even more disappointing is Mira Nair’s vignette, in which Natalie Portman plays a Hasidic woman about to enter into an arranged marriage, but takes time out to incredulously bond with an Indian immigrant hawking wedding rings in the diamond district. There’s an unconvincing implication here that these two erotically inclined individuals must dutifully suppress their spontaneous chemistry drawing them to one another.

The dramatically potent emotional intensity of this encounter and several others in the film, while lacking in bracing storytelling skills, is conclusive evidence that what is taking place is more akin to a series of actors workshops than a cohesively satisfying movie. And by the time Olivia Thirlby’s handicapped but horny prom princess is swinging sexually from a Central Park tree in what seems like director Brett Ratner’s not entirely healthy whim, don’t ask, the audience may be ready to call it a day. Even if the filmmakers still waiting their turn in line aren’t feeling so inclined that way.