The title ‘Never Let me Go’ suggests that this is a boy meets girl movie, in the vein of Love Story, but sadly this is not the case. It’s actually about misery, suffering, hopelessness and death, and has very little to do with matters of the heart, unless you count the deadly surgical removals at the local hospital. I bet you can’t wait to get to the theatre, can you?

Kathy, Ruth and Tommy are born in the late 60s, when all fatal diseases have been cured. As children, they are brought up in a British boarding school where Kathy and Ruth enjoy the friendship of their peers but Tommy is the kid everyone makes fun of. Kathy feels sorry for Tommy so befriends him and they bond, but Ruth, who has previously teased Tommy mercilessly, suddenly changes her allegiances and takes Kathy’s place as Tommy’s friend. At the age of 18, all children are transferred to communal living quarters, and Kathy, Ruth and Tommy are sent to the same place. Here they await the fateful call that tells them their life as an organ donor is to begin. 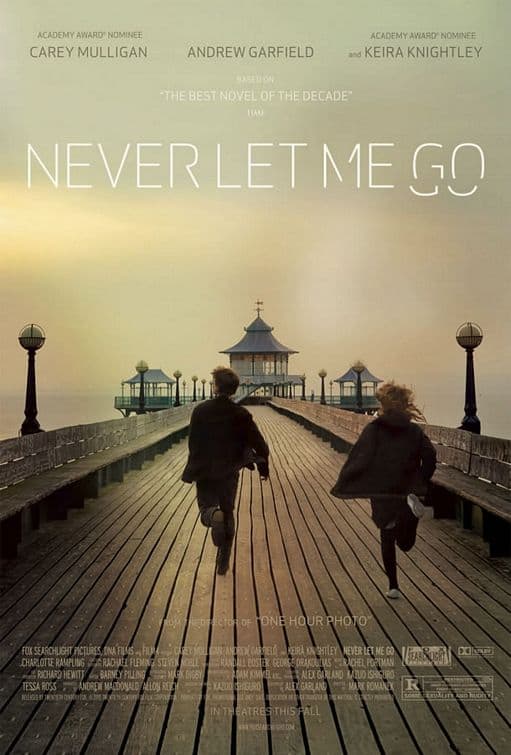 There should be three worlds at play in this film, the first being the world the three main characters inhabit, the second the world of the donors, explaining the how/what/whens, and the third the world where the story is set, where the recipients of the organs exist. But this does not happen, absolutely nothing is explained and the film flops around between the three characters, rarely going anywhere and with content so black you’ll need Prozac rather than popcorn to get you through.

Another huge oversight on the part of the filmmakers is that they fail to explain why these young people don’t try to escape their grisly fate. We don’t see any brainwashing at the school, the characters all seem completely normal and are free to come and go as they please, so when they know their number’s up we’re left wondering why they don’t all just leg it up the highway.

This is, without doubt, the most depressing film I’ve seen in my entire life. It’s basically one long death march and the only message it gives its audience is ‘Don’t breed children just so they can grow up and have their organs harvested, one by one, until they die, because it makes them very unhappy.’

So now you know.