In what may be shaping up as a movie season big on ghostwriters and not just blockbusters, Swiss born Jewish director Dan Levy’s My Fuhrer: The Truly Truest Truth About Adolf Hitler follows Judd Apatow’s Funny People as a kind of Cyrano de Bergerac fixit guy yarn reconnecting tongue-tied superstars with the mutual love of their lives – the audience. And though Adolf Hitler is no Adam Sandler, his standup mass apeal during the dreaded Nazi period in Germany receives a similar, at times uncomfortably goofy treatment here, that lends a new and different political twist to the notion of grossout.

Couched a little too playfully as a satirical reinvention of history, My Fuhrer finds Professor Adolf Israel Gruenbaum (Ulrich Muehe), a formerly famous Jewish actor and now death camp inmate, summoned by Goebbels to assist Hitler (Helge Schneider) in spiffing up his declining stage presence. World War II is winding down, and defeat for Germany is on the horizon, sending the Fuhrer into a despondent state of mind. And Gruenbaum, while being assured not to ‘take the Final Solution personally,’ is assigned an offer he can’t refuse, namely to serve as Hitler’s acting coach. 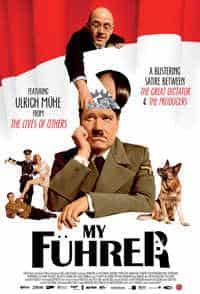 While there are some engaging and inspired moments, as when Hitler fiddles around with a toy replica of one of his battleships in his bubble bath, or the surreal, magnificently incorporated period footage of destruction and bombed out urban rubble imposed into the film’s set pieces, other sequences don’t fare quite as well. Especially scenes where the two Adophs, Nazi and Jew, interact in a manner that speaks less of the nervous discomfort between the two men, than the director’s own hesitancy and awkwardness in approaching this macabre meeting of minds. Though the flaky finale does provide a dash of fiendishly nasty humor, that reminds us just how horrific this lightweight subject matter at hand, was meant to be.