With the current scandals playing out in the polygamist religious communities in this country, in particular the abuse of children in the name of faith, the film My Father My Lord, though focusing on a far different religious fanaticism on the other side of the globe, could not be more relevant at the moment. A candid and lyrical dramatic dissection of an orthodox Haredic community in Israel, My Father My Lord is the debut feature film of someone who knows intimately of what he speaks, for Israeli filmmaker David Volach grew up in that community, with which he eventually severed ties to becomes a director.

My Father My Lord sheds enormous light on the contradictions existing between all-consuming rigid religious conviction based on discipline and doctrine, and the far more spontaneous and unpredictable human impulses that manifest themselves in childhood. Menahem (Elan Griff) is the young school age son and only child of aging Rabbi Eidelman (Assi Dayan, offspring of the late Israeli leader, Moshe Dayan), the spiritual head of his hermetic community. 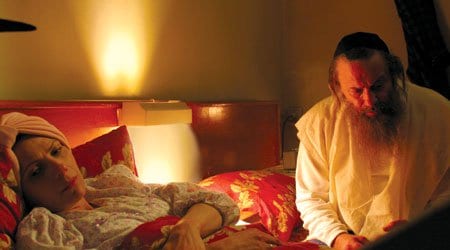 While a loving father, Eidelman is more attentive to his fully engaging biblical preoccupations and social responsibilities to his followers, and has little time or patience for his son’s persistent questioning of faith, and curiosity about the outside surrounding world. So in essence, Eidelman’s caring but obedient, deferring wife Esther (Sharon Hacochen Bar) must compensate for her husband’s emotional absenteeism by providing a nearly dual parental role in the life of her child.

Esther, however, is also restricted from full flowering as a human being or even a mother, by her position as a female in that sect, relegated to essentially second class citizenship and imposed physical segregation that define many social and religious activities of the community. And when an enormous tragedy strikes that can neither be comprehended nor consoled by formal religious doctrine, the family’s spiritual faith and certainty become sorely tested.

My Father My Lord is eloquent filmmaking, where profound emotion and meaning are conveyed through the most subtle and poetic physical gestures and moods. A critical, yet sympathetic scrutiny of human nature’s desperate bid to cling to structure and predictability in an often uncertain and chaotic world.