Dazzling Dreamgirl Jennifer Hudson may have come a long way, baby, to where she is now, co-starring in Sex And The City: The Movie. But no matter how long or how many times this gifted songwriter, performer and actress gets to be the recipient of major star status treatment, as she described in this interview, it still never seems quite real. Jennifer also dropped hints during this girl talk session about her upcoming album, hating heels, and still saving all her love for that mystery guy back home.

Hey Jennifer, since this movie is a lot about fabulous high heels, what are the highest heels you’ve ever worn? 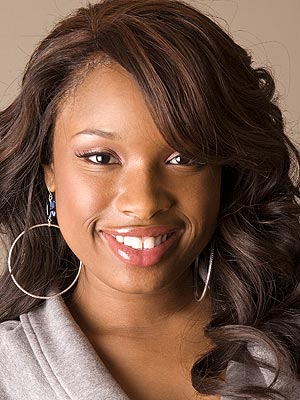 JENNIFER HUDSON: Hmm…Do I have on heels right now? Yeah, I’ve got them on my feet a little bit. But to be honest, I don’t like any shoes! And I can’t stand heels. But I don’t know what are the highest heels I ever had. And I won’t last in them too long, at all.

So you’re not jealous of those other SATC girls’ shoes?

How tall are you?

SATC is also about writing letters. Are you into that at all?

JH: Nah. But I am a texting freak. Which I guess is kinda like the new love letter.

How did you like coming from Dreamgirls, to being a Sex And The City girl?

JH: I loved it! Dreamgirl, and then SATC girl? That’s hot!

And this is a role where you didn’t have to sing.

JH: Yeah, I was looking for that, you know? I want to just act too. I don’t mind singing in a film, but I don’t want every film to be like that.

Is it true you never watched the show before signing up for the movie?

JH: Yeah. But when I started watching the DVDs, that’s when I fell in love with it.

How did it feel being the new ‘girl’?

JH: I was nervous. But they made me feel very welcome and right at home, because it’s like one big, huge happy family. I kinda felt like the baby of the family. You know, the new baby!

Don’t you have a song on the SATC soundtrack?

JH: Yes, it’s All Dressed In Love. It’s great, because the song takes fashion and love, and ties them together. It’s like a perfect Sex And The City song.

Were you ever somebody’s personal assistant, like the character you play?

JH: Oh, lord! I think it’s fun being somebody’s personal assistant. In a movie! But I’m not that organized. And I can’t work no computer! At all. Although I did switch roles with my assistant, so I could get the feel of it. Which I don’t think I did too good of a job!

How did that work out?

JH: Like I would answer my phone and say, this is Walter’s assistant. Yeah.

JH: I’ve never been label-crazy. But I wouldn’t do a knockoff. Like in my last interview, they asked me what was I wearing. And I said, I have no idea!

But those SATC women are all serious fashionistas. So did that give you a new appreciation for fashion?

JH: Oh yeah, definitely. Like I’m more into fashion now, it’s more exciting. And it makes me want to experiment with my style, and try to be a little…Pat Fields. Jr. over here!

Which SATC girl do you relate to most?

JH: I’d say Charlotte [Kristin Davis], because she’s more like the wholesome, traditional girl that’s more like me. So I’d say I relate most to Charlotte.

What about Sarah Jessica?

JH: She was definitely a huge support system, and a cheerleader as well for me, for the role. Yep.

Your character Louise is pretty sassy. Are you anything like that?

JH: You know what, that’s me! I actually have a song called Sassy, that’s it. And that’s what they say, sassy as she wanna be. But yeah, that’s very much like me.

And I think that adds a little flavor to the character. You know, that gives it a little bit more. Yeah, Louise is sassy.

Now, let’s talk wardrobe. Didn’t you feel under-dressed, compared to the other women.

JH: Yeah, I wanted to dress like them. But it was unrealistic for my character, her budget was not their budget. I mean, she was just a college kid, living in a one bedroom apartment. With three roommates! So she couldn’t afford any of that stuff. That’s why she rented her bags!

JH: Yeah, you can. I wish I had thought of that! Whoever did, is genius.

Did you start getting hounded by everyone when you got this role?

JH: Yeah, everybody. I had to duck and dodge.

How did you deal with that?

JH: I’d just tell everybody, wait on it. It’s coming!

Can you talk about your new album?

JH: Yes I can. The single comes out this month. Which is Spotlight. And I’m going to Rome to promote it internationally. Then the album comes out September 30th.

JH: I haven’t named it yet. When I’m working on a film I don’t want to work on the other, and tie them up.

How does the album reflect where you are now in your life?

JH: It definitely reflects. Like I feel that anything I sing, happens. I feel it should have some meaning or some kind of purpose, to sing a song. So the material definitely reflects where I am, where I’ve been, and where I’m going. And which India and I wrote.

And where is that right now?

JH: Hmm…Like Greatest Creation. Which I still have yet to record. It kinda talks about how I see myself, and the way I would like to see myself. And that my greatest creation is me, and my pride in myself.

And let me pick another one for you. I would say…Oh, y’all waiting! There are so many songs. I’ve already recorded at least sixty songs, to be honest.

Are you still dating that guy back home, or are you married now?

JH: No, everybody thinks I’m married. I’m too young to get married!

JH: It seems that. And having babies too. Huh… I’m gonna wait on that!

So what’s up with that guy back home?

And is he still in your life?

Your character in SATC is really big on love. Are you like that too?

JH: I am, I am. One thing I love about Louise, is that she believes in love, and she gives loves. And I think that’s how she gets it back. So I love that. And my favorite line in the movie, is ‘love is the thing.’ You know?

Is celebrityhood everything you thought it would be?

JH: I didn’t know what to expect, at all. Like, everything I’m discovering, as I go along. It’s still so new to me.

Will you ever be over it?

JH: Not at all. I love it. I love people, And clearly, I love talking! And I just love what I do. So clearly it’s about the love for my work, more than anything.

And it’s such a blessing. It’s not every day that you get these kinds of opportunities. And I’m just blesses and grateful, to be that person. And everything right now is like wow, what’s around this corner. And you can never get used to it. It’s like surprise after surprise.

Has all that whirlwind around Dreamgirls died down by now, or is it still just as crazy?

JH: A little bit of both. There are those moments where it’s quiet, and I tuck myself away kinda thing. But that was crazy, with the whole Dreamgirls thing and the Oscars, and all of that.

But ooh, I’m glad I get to come down from all that. Because it was really a roller coaster. So yeah, it does come down a bit.

Have you seen Dreamgirls on television?

JH: I saw it once on TV. But I don’t watch cable that much.

Now for the American Idol question. Have you been keeping up with it lately, and all the craziness that’s been happening?

JH: I didn’t see that. I keep saying I would. And like what happened with Paula? But I do try to watch when I can. And that’s just my moment. I’m like ooh, I get to watch iIdol tonight. I get really excited about it.

Will there ever be a behind the scenes of Behind The Scenes of American Idol?

JH: That would be a whole ‘nother show, to be honest! It would. And it would be like number one, and knock Idol off the charts!

What do you remember most of all from Behind the Scenes?

JH: I don’t know, just the reality of it. Just like the fact that we lived together. I remember when we first moved in. I was like God, I came to do a show. I didn’t come to be married to ten other strangers!

The living arrangements may be different now, but we all slept in the same room. Wait, now don’t get the wrong idea! It was sleepover style. And I was like, what?

And we did every single thing together, everything. We woke up together, we traveled together, we had to be on the show together. And I was like, am I married to eleven other people, what is this!

Have your heard from Simon?

JH: I have not heard from Simon. Didn’t he apologize to me on Oprah, something like that. He ate his words!

Do you keep up with any of those people there?

JH: Yeah, from time to time. We all share a connection, because there’s only so many of us who have shared this experience. So I just try to reach out and communicate with them. And support everybody.

Did you ever blow out your voice, like Jordan?

Where do you keep all those awards of yours?

JH: Um, all my awards are in my house. Which is kinda like my furniture. Because I’m never home. You know, I never had time to furnish it. So the awards are pretty much all the furniture!

But the one I’m missing is the BAFTA Award, and they never sent it to me. If anybody knows where I can get my BAFTA from, please tell me!

Were you invited to Beyonce’s wedding?

JH: I wasn’t. I don’t know, is that true? Did she really get married?

JH: Well, Beyonce is an extremely private person, so I respect that. But I gotta catch up with her now!