When L’Tisha Morton (Vanessa Williams) discovers that she’s dying of tuberculosis, her first concern is for the welfare of her sons, ages 8 and 11. The single-mom desperately wants them both to be adopted by the same family, because James (Christopher Scott), the younger one, is mentally-challenged. And when that doesn’t happen, rather than allowing the two to be separated, she entrusts the elder, Isaiah (Nashawn Kearse), with raising his sibling who is afflicted with Down Syndrome.

Not surprisingly, simply trying to survive on their own in as unforgiving a city as New York proves to be quite a challenge, and that endeavor is the essence of what My Brother has to offer. Along the way, Isaiah is understandably distracted periodically, whether by the possibility of making easy money via street crime or by the womanly wiles of a seductive Sugar Mama (Tatum O’Neal) with Jungle Fever. So, the question is whether he will remain resolute in resisting temptation and opt to behave responsibly. 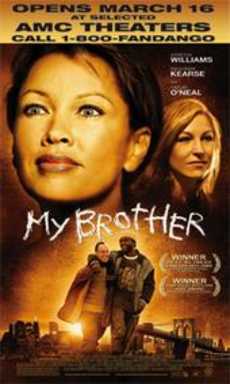 The picture was written and directed by Oscar-nominee Anthony Lover (for De Duva: The Dove), who must be credited for using his cinematic canvas to paint a quite touching tableau of brotherly love and devotion. What makes the movie even more remarkable is that it is the first film ever to feature an African-American with a developmental disability in a lead role. In fact, we really have two such actors making their screen debuts, here, for both Donovan Jennings (James at the age of 8) and Christopher Scott (James as an adult) have Down Syndrome.

The historic aspect of the production aside, there are a couple of other reasons to recommend My Brother. First, seeing a ghetto-based drama revolving around black males not behaving either like amoral gangstas or clownish buffoons is a welcome change of pace. Secondly, although the script runs a little long, it was well crafted and expertly executed by the capable cast, most notably, Vanessa Williams, who exhibits an emotional range unseen in any of her previous work.

A moving and meaningful melodrama about a blood bond tested by the trials and tribulations of trying to survive in the inner city.