Part Romeo And Juliet on wheels and part Driving Miss Daisy in the hood, Musical Chairs is a love story about the challenges faced by physical disability, but at the same time highlights though never gets around to exploring an incidental issue. And that is, no matter how crowded a city like the Big Apple might be, the culturally diverse inhabitants may as well be residing miles apart.

E.J. Bonilla is Armando in Musical Chairs, a hopeful and ambitious young Puerto Rican man living in the Bronx with his parents, and aspiring to be a professional dancer. But relegated to more of an outside looking in reality, Armando currently resigns himself to dividing his time between doing menial chores at the family’s neighborhood restaurant, and working as a janitor at an Upper East Side dance studio. Where on mop duty down time, he picks up the dance moves of instructors there, but lacing them with lots of homespun Latino flavor. 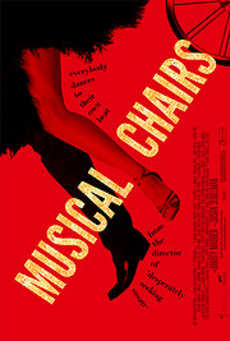 Armando is also infatuated with the lead dance instructor, Mia (Leah Pipes), a wealthy young white woman who is impressed when she catches sight of Armando secretly dancing by himself at the studio after hours. But their relationship seems to be strictly confined to the workplace, and limited at least on the part of Mia by possibly class, cultural and economic differences.

That is, until one day when Mia is struck by a car, sustaining a permanent spinal cord injury and ending up a paraplegic in a wheelchair. Which affords the obsessed young man an opportunity to lavish attention on Mia and encourage her to fall in love with him. Even as his disapproving mother attempts to sabotage their relationship and pressure an indifferent Armando into dating the willing neighborhood hottie Rosa (Angelic Zambrana), quite an impressive dancer in her own right.

Speaking of dancing, Armando seems to have all but forgotten that particular life passion in his fixation on a psychologically vulnerable Mia. Until a wheelchair ballroom dance competition comes to town, and Armando takes it upon himself to train the residents of Mia’s rehab facility to enter the contest.

Filmmaker Susan Seidelman is best known for the casting coup of Madonna in her memorable 1985 fantasy romp, Desperately Seeking Susan. With Musical Chairs she’s clearly a director for hire, and it shows. Though the story has plenty of heart and the actors lend extraordinary emotional weight to their characters, the attention to narrative detail is skimpy. And never sufficiently probes questions, such as if this romantic involvement would have happened at all, had Mia not become disabled.

Or even more jarring, why are all the wheelchair bound costars seemingly just fine with their handicaps, and more concerned with Mia’s predicament than their own. In a case of an unfortunately fractured narrative that, unlike these broken characters, could have benefited from some mending.