Besides being 15 year-old Chicanas, Yolanda “Mosquita” Olveros (Fenessa Pineda) and Mari Rodriguez (Venecia Troncoso) are about as different as night and day. The former is a straight-A student and the only child of overprotective parents (Joaquin Garrido and Laura Patalano) with high expectations for their dutiful daughter. The latter, by contrast, is a relatively-troubled rebel being raised by an overwhelmed widow (Dulce Maria Solis) who’s been struggling just to keep a roof over their heads since entering the U.S. illegally after the death of her husband.

The Rodriguez’s plight as undocumented immigrants means that Mari has to work part-time to help out her mom financially, a burden that has taken a toll on the kid academically. Consequently, the grieving, underachieving street urchin has learned to mask her pain with a tough “I could care less” veneer. 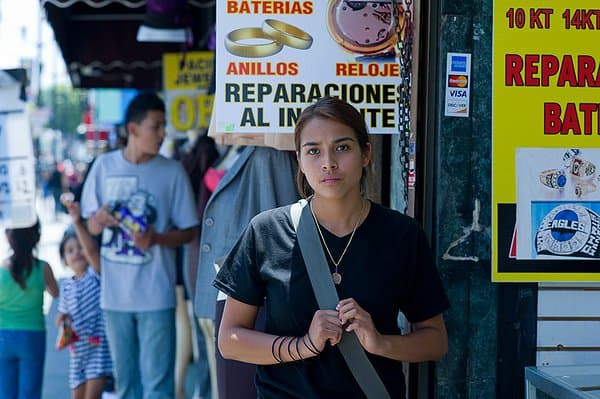 Mari and Mosquita’s paths do cross when the Rodriguez family moves next-door to the Olveros in a Spanish-speaking neighborhood located in the Huntington Park area of L.A. The two sophomores initially forge a grudging friendship at school, trading off tutoring in geometry for protection from a clique of mean girls.

But soon, they’re happily spending so much time together in the afternoons and evenings that Mari loses her job while Mosquita’s grades start to suffer. The plot thickens as it becomes clear that these polar opposites are not only lesbian-curious but experiencing barely-contained pangs of puppy love for each other.

Tension builds as the schoolgirl crush blossoms into a passion simmering close to the surface as each waits for the other to make the first a move. But the best these awkward neophytes can do is snuggle under a blanket while studying and scribble their names in a dirty automobile’s dust.

Finally, the moment of truth arrives after a handsome boy asks attractive Mosquita for a date around the same time that a seedy man offers cash-strapped Mari money for sexual favors. At that point, obviously, something’s gotta give.

The question is whether or not they’re ready to take a big leap.

Marking the marvelous writing and directorial debut of Aurora Guerrero, Mosquita y Mari is a subtle exploration of coming out from the perspective of introspective adolescents at an awkward age. However, the movie has much more to offer, as it is equally sensitive in its examination of a variety of issues of urgent concern to the Latino community.

To think that in just one generation we’ve gone from Chico and the Man to Chica and the Girl!

In Spanish and English with subtitles