This film attempts to create a culture clash but is so clumsy in its execution that it repeatedly demeans the waitress who left high school at 16 and is classist storytelling at its most unattractive. It’s far too unsophisticated for anyone over the age of 10 to enjoy and is simply a children’s version of Sex and the City, minus the great writing and Carrie.

Grace (selena Gomez), Her Friend Emma (katie Cassidy, The Waitress), and Meg (leighton Meester), Go to Paris for a Dream Vacation, But Find Themselves Stranded in The Rain on Their First Day. They scurry into a five star hotel to shelter and Grace gets mistaken for a wealthy, British socialite, Cordelia Winthrop Scott (also played by Selena Gomez). Cordelia suddenly leaves for Spain, leaving everyone at the hotel believing that Grace is Cordelia and the three decide Grace should obligingly go along. They spend a luxurious night at the hotel and then get whisked off to Monte Carlo where they rub shoulders with royalty, party on yachts and learn to play polo.

As there is nothing of substance in this story for the filmmakers to work with, they constantly resort to co-incidences. Meg bumps into the same Australian guy twice in Paris, and then yet again in Monte Carlo; Emma’s U.S. boyfriend arrives in Paris after she leaves but manages to locate her in Monte Carlo in a matter of hours; Grace goes to Greece and bumps into the Italian guy she met in Monte Carlo. This is really lazy writing and while the young audience might not notice, the moms who take them will and next time may not be so willing to cough up for the parking, tickets and popcorn. 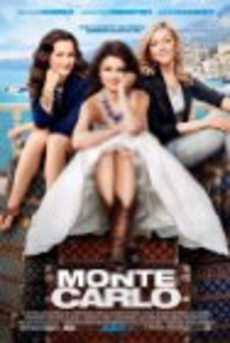 The fantasy element in this film is an excellent idea for 8 year-olds and a license for all kinds of Alice in Wonderland things to happen. The ultimate would, of course, be for the girls to turn into princesses, or at least something fairy tale-like, but the filmmakers walk right past all these magical possibilities and keep everything pretty mundane. Even the ball is no more than a fleeting event without so much as a glass carriage or Prince Charming in sight.

Bad Girl Cordelia does have a definite appeal but she makes very few appearances and, incredibly, never interacts with her doppelganger, Grace. Having the two pitted against each other would have fascinated the kids and perhaps filled the yawning gap where the funny lines are supposed to be, which brings us to the humor. If a film has no laughs, it means it’s actually a drama, not a comedy, which is an obvious enough fact and perhaps simple enough for even those non-graduate waitresses to understand.