A neo-screwball hip comedy jazzed up with a classy swing score and a fresh coat of slightly salty, rapid-fire flirty conversations, Miss Pettigrew Lives For A Day captivates with its slick wit and crisp rhythms. Based on the novel by Winifred Watson, this British midlife Cinderella satire embraces the rude antics of the scandalous rich and infamous celebrity elite, as World War II looms all around their silly, empty heads.

Amy Adams, still enchanted as she moves on from ditzy fairytale princess to 1930’s ditzy London stage diva in the movie, comes off as a kind of younger, bubbly version of Nicole Kidman. She plays Delysia Lafosse, a filthy rich American import and overnight sensation on London’s West End stage.

But decidedly not counted among her throng of adoring fans, are the short shelf life social secretaries she hires, who quickly tire of her chaotic, playgirl lifestyle and bolt at the first opportunity. Never mind, enter Miss Pettigrew (Frances McDormand), a world weary midlife failed governess of last resort who’ll take any position you’ve got. Because it beats dining in soup kitchens, when she’s tossed out of scores of nanny gigs after notoriously losing children in the parks.

But tending to the affairs of this pre-Britney Spears space cadet party girl, may be too taxing even for a pro like Pettigrew who’s made a career specializing in handling childish creatures. For her main task turns out to be concealing Delysia’s numerous lovers from one another, as they enter and depart the boudoir of her extravagant penthouse digs. 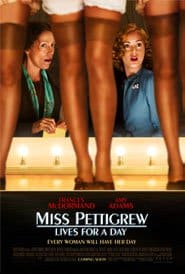 So Pettigrew decides to stick with it, not only because her assignment certainly beats those soup kitchens and Delysia is beginning to feel lost without her. There’s also the overtures of a certain infatuated swell (Ciaran Hinds) who frequents the same pretentious soirees as Delysia. He’s a celebrated women’s underwear designer in the days when intimate whalebone apparel was all the rage, and he may have a different set of designs on Pettigrew as well.

The film, while breezy and playful with its own unique quirky charms, places a little too much emphasis on the ambitious ploys and shallow pursuits of this mostly vain, crafty and selfish leisure class. This, as the advancing war barely impinges somewhere, far in the background.

And though attack planes threaten overhead as they party and perpetuate their devious intrigues, heedless of it all, the film itself seems to get caught up too, impressed with its own euphoria and losing sight of that key historical moment glimpsed only in passing. Or, as one character laments about life that could refer likewise to Miss Pettigrew Lives For A Day, ‘I distracted myself with silly things.’ And more to the point, in that favored flavorful lingo of the day that the film lavishly steeps itself in, Dog-gone It.