Everybody knows that the story of Snow White is about an expiring damsel-in distress who’s ultimately revived by a handsome Prince’s kiss on the lips. But the world has changed considerably since the Grimm Brothers first published the fairytale in 1812, so why not tweak it a tad to reflect 21stCentury sensibilities?

That is ostensibly the idea behind Mirror Mirror, a novel overhaul of the original into a female empowerment flick featuring a spunky heroine capable of saving herself rather than having to rely on a knight in shining armor. Directed by Punjab-born Tarsem Singh, this incarnation even includes a Bollywood dance number during the closing credits.

Furthermore, it renames the seven dwarfs to Napoleon (Jordan Prentice), Half Pint (Mark Povinelli), Grub (Joe Gnoffo), Grimm (Danny Woodburn), Wolf (Sebastian Saraceno), Butcher (Martin Klebba) and Chuckles (Ronald Lee Clark). But before you suggest that it might be blasphemous to take such a liberty with the supposedly-sacrosanct source material, consider the fact that the septet had previously been popularized as Blick, Flick, Glick, Snick, Plick and Whick by a 1912 Broadway production before subsequently being dubbed Bashful, Happy, Sleepy, Sneezy, Grumpy, Dopey and Doc in Disney’s 1937 animated version.

Here, despite several superficial changes, the essence and message of the fable remain intact. It revolves around the attempt of a wicked stepmother (Julia Roberts) to become queen by preventing her beautiful stepdaughter (Lily Collins) from ascending to the throne following the disappearance of the King (Sean Bean).

So, the evil Clementianna not only banishes the grieving orphan to the forest to die, but soon sets her sights on replacing her hubby with Snow’s suitor, Andrew Alcott (Armie Hammer), a wealthy prince from a neighboring kingdom. However, after placing the young nobleman under a spell, the vain monarch still finds herself frustrated by her magical mirror’s answer to “Who’s the fairest of them all?”

For instead of perishing, the enterprising, exiled princess survives her ordeal by bonding with a band of diminutive men living in the woods. And, with their help, it’s just a matter of time before the rightful heir returns to reclaim her inheritance, flipping the script in the process by breaking the Queen’s spell with a peck on the Prince’s lips.

Between the elaborate costumes and splendid principal cast performances by Lily Collins, Julia Roberts, Nathan Lane and Armie Hammer, Mirror Mirror adds up to an enchanting update of a much-beloved classic guaranteed to delight kids of any age. 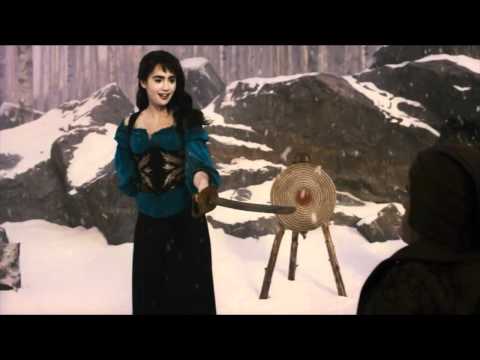