Harvey Milk (1930-1978) was a trailblazing pioneer in 1977 when he became the first openly-gay person to be elected to political office in the State of California. The outspoken activist had represented San Francisco’s Castro District as a City Supervisor for less than a year when he and Mayor George Moscone (Victor Garber) were murdered by Dan White (Josh Brolin), a disgruntled rival and former Supervisor. The assassination turned Milk into a martyr, and to this day he serves as a symbol of courage and hope for homosexuals and lesbians gays everywhere.

Milk, directed by Gus Van Sant, is as much an historical account of the rise and sudden fall of a beloved cult hero as it is an intimate character study of a vulnerable, complicated soul. The film stars Academy Award-winner Sean Penn (for Mystic River), who rises to the challenge, and thus should be a shoo-in for his fifth nomination for his curiously brash yet endearing performance in the title role.

The picture couldn’t be more timely, given the controversy surrounding the recent passing of Proposition 8 banning gay marriage in California. The opening features a black & white collage of archival footage of arrests and intimidation of homosexuals and of police raids of gay bars during less enlightened times, followed by a brief clip of an ashen fellow Supervisor Diane Feinstein announcing the murders of Milk and Moscone. 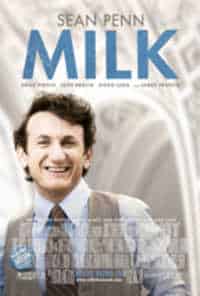 Harvey then proceeds to narrate his own story in a series of flashbacks, having ostensibly been inspired by a premonition to dictate a memoir into a tape recorder shortly before he was killed. Beginning, “This is only to be played in the event of my death by assassination,” the setting shifts to New York City on his fateful 40th birthday when he met Scott Smith (James Franco), a handsome, young newcomer from Jackson, Mississippi.

Love blossoms despite the considerable age difference, and in 1972 they decide to move to San Francisco and open a camera shop. Now, out of the closet, a more flamboyant Harvey is shocked by the bigotry he encounters on account of his sexual preference, especially in a town thought of as tolerant. Thus, begins his transition into a gay activist, and into a community organizer wise enough to forge strategic allegiances with labor, blacks and other groups.

Unfortunately, the consciousness-raising takes a toll on his relationship with Scott, who moves out and is eventually replaced by a boyfriend (Diego Luna) more appreciative of the protagonist’s political agenda. Nonetheless, Harvey’s first two election bids (in 1973 and 1975) fail, though he finally gets to enjoy the sweet taste of victory after the hard-fought 1977 campaign, only to incur the wrath of the homophobic White. By the way, he got off with a relative slap on the wrist by employing the infamous “Twinkies made me do it” defense.

Hauntingly, Harvey’s voiceover persists in the picture posthumously, exhorting the masses to continue the movement, and not merely on behalf of gays, but for all the disenfranchised. Expect to shed a few tears during the closing credits montage when real-life photos and updates of the principals portrayed in the movie are juxtaposed against the actors playing them.

A rare bio-pic of sufficient depth and emotional complexity to humanize an icon while simultaneously conveying the significance of his lasting contributions to the culture.

To see a trailer of Milk,