Middle of Nowhere is a cinematic masterpiece reminiscent of those rare treasures that have managed to capture an authentic slice of African-American life, ala such black classics as Love Jones (1997), The Best Man (1999), The Visit (2000) and Brown Sugar (2002). However, this introspective tale of female empowerment simultaneously touches on a number of universal themes apt to resonate with an audience of any demographic.

The picture was written and directed by rising star Ava DuVernay, this year’s winner at the Sundance Film Festival in the Best Director category. The story revolves around Roberta “Ruby” Murray (Emayatzy Corinealdi), a med student who’s on the brink of becoming a doctor when her husband, Derek (Omari Hardwick), is sentenced to 8 years behind bars for a drug conviction. 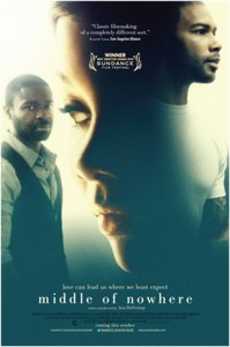 Rather than abandon the love of her life, the loyal wife decides to drop out of med school to give her man the emotional and financial support he’ll need while in prison. This means she’ll have to endure long bus rides just to see him, and also have to pay his legal bills on a nurse’s salary.

However, the shame and separation eventually take a toll on the relationship, especially when Derek has a jailhouse romance and sabotages his chances for an early parole with fresh criminal charges for fighting. Suddenly Ruby finds herself questioning the wisdom of her slavish devotion, and she begins entertaining the advances of a bus driver (David Oyewolo) she’d befriended.

To date or to wait, that is the question? Ruby has a couple of confidantes to turn to for advice, but neither proves to be of much help. One is her sister, Ruth (Lorraine Toussaint), a single-mom with a bad track record of her own with men. The other is their embittered mother (Edwina Findley) who can only muster up ineffective, if well-meaning, suggestions like “Hold your head up, please.”

So, in the end, it’s up to Ruby to decide for herself, but only after lingering interludes of reflection and contemplation. A refreshing alternative to the superficial mainstream fare that tends to stereotype sisters as either sassy mammies or compliant sex objects.

To see a trailer for Middle of Nowhere: