So how does prostitution as a career choice measure up against say, enduring domestic violence at the hands of a brutal spouse, or assembling lampshades in a factory. For Dutch identical twin septuagenarian sisters Louise and Martine Fokken, opting for the life of a hooker instead is a definite no-brainer. But is their joint guided tour through five decades of selling their bodies in the red light district windows of Amsterdam in Meet The Fokkens, a case of more than meets the eye?

And though to what degree the seductive senior siblings for sale are leveling with audiences or performing for the camera is up for grabs, certain truths vividly come into play under the gentle nudging of co-directors Gabrielle Provaas and Rob Schroder. Namely, their vivacious refusing to act old, along with a bold defiance by the plump and never less than bubbly twins, challenging the cultural norms of what is means to be beautiful in Western society.

Still promenading proudly about town in matching floral dresses, hats, and with identical bicycles too, the sisters recount a history of post-WWII poverty, a free agent disdain for male bosses, boyfriends and abusive men, and skimpy inadequate pensions that have defined their lives as prostitutes. Though the twins have moved in separate directions to a limited extent, as Louise bemoans dropping out of the biz due to arthritis which prevents her from ‘lifting one leg over the other’ any longer. And Martine, in an effort to keep up with the younger red light district competition – which she in fact surprisingly does – parades around her window in extra large leather with spanking ping pong paddles on hand, when not shopping for the latest futuristic, remote controlled sex toys.

And unlike the often dreary, verbal monotony of more conventional documentaries, these two talking dirty heads in Meet The Fokkens deliver. Regarding a never a dull moment good time just listening to them gab on about life, strictly from their point of view. And, whether oil painting on canvas colorful flowers, cats and pierced crotches while holding a pet chihuahua, swapping stories about priests and rabbis turning up for a little TLC – or the one about the morbidly obese biker guy, who nearly broke Martine’s bed in two.

Trailer of the Meet the Fokkens: 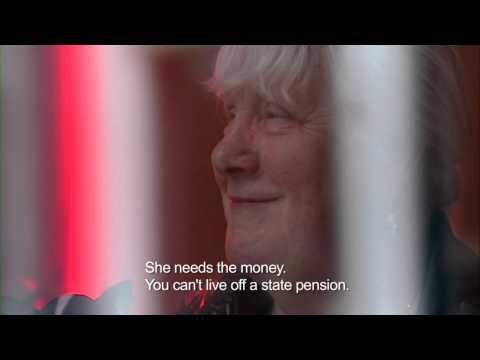