Possibly borrowing a bit from the breakout success of Knocked Up and its notion of upscale women dating down, way down, the smitten stalker comedy Management aims for the sweeter side of creepy behavior when it comes to romance. And while the pathologically inclined love crazed talking points of this script might be more appropriate for a motel horror movie say, like Psycho, Jennifer Aniston and her nutty suitor played by Steve Zahn, excel at keeping the potentially darker tone always threatening to rise to the surface, reliably upbeat and breezily afloat.

Jennifer Aniston is Sue in Management, a corporate sales agent who makes the rounds from town to town, hawking tacky artworks intended as decorations for commercial settings. When she stops for the night at a seedy family run motel in nowhere Arizona, the proprietors’ son Mike (Steve Zahn), who has been cooling his heels there his entire adult life as the forlorn night manager, makes a series of inappropriate persistent plays for the exhausted woman, who just wants to get a room.

After a succession of visits to Sue’s door, with offerings of bottles of wine and champagne that he digs up and pretends are routine gifts for guests, she figures out just what Mike is up to. And in turn makes a rather kinky business deal, to allow the bottom feeder to touch her bottom just once, if he’ll go away for good after that. 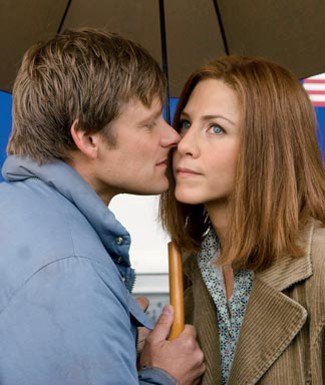 But the butt grabbing arrangement, utterly formal and impersonal in its terms and execution, affects the somewhat lonely businesswoman to such an extent, that she soon finds herself tracking down the perpetrator with permission to grab, over to the motel laundry room. Where she intiates a quickie on the run between the sheets, the ones he’s folding, that is, before dashing out of town on her next work assignment. But with Mike not far behind, to her dismay, as he pursues her around the country whether she likes it or not. And despite some fairly thuggish interference on the part of her rich and infamous punk rocker lost and found boyfriend, played by Woody Harrelson.

Management, whether of hotels or bad artwork, is beside the point here. It’s all about the decisions people make to impose order and logic on their love life, or determined lack of it. But finding themselves instead hopelessly ruled by their emotions, when not helplessly making complete romantic asses of themselves, grabbed or not. And it’s those particular qualities of zany unpredictability and homespun humor that Aniston and Zahn impart with enormous tenderness to their roles.