A mega-musical that needs no introduction, having been staged in one hundred sixty cities via eight languages and seen by more than thirty million people around the world, Mamma Mia! bursts onto the big screen with perhaps more exuberant self-confidence than is prudently warranted. This cross-generational crossing of swords romp, with free love and family values facing off to a strident ABBA beat, never lets the story get in the way of its karaoke brand of flamboyant musical attitude for a minute.

Directed by Phyllida Lloyd and written by Catherine Johnson, this lavish and raucous all-girl production sets up shop on a picturesque Greek island, where adventurous and fiercely independent American single mom Donna (Meryl Streep) has been running a small hotel for the past few decades. Her only child, twenty year old Sophie (Amanda Seyfried), has been preparing for her upcoming wedding day. But Sophie’s also long been secretly agonizing that she has no idea who her father is, and Donna has never been willing to engage in that particular conversation.

And when she comes across Mom’s old diary that she’s stashed away, Sophie gets wind of at least three potential dads that Mom was fooling around with just before her accidental entry into the world. More than anxious to get to the bottom of the mystery surrounding her paternal origins and have a dad give her away on her wedding day, Sophie secretly locates and invites all three men (Pierce Brosnan, Colin Firth and Stellan Skarsgard) to her nuptials, unbeknownst to her mother, who hasn’t seen any of them since their youthful days of heated passions and even hotter sex. 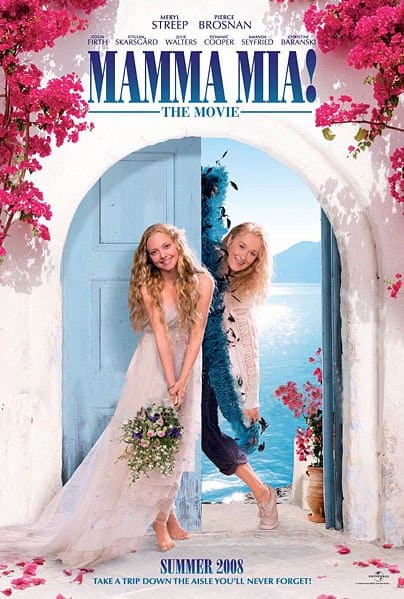 There are plenty of buoyant antics in the mix when the trio of literally and figuratively old beaus turns up and freaks out retired free spirit and sworn celibate Donna all over again. Meryl surprisingly impresses with her accomplished vocals and physical grace during several euphoric dance numbers. And the story does have plenty of heart and genuine emotion, and could have used more breathing space to shine between far too many shrill, well, Greek choruses. In particular that old rascal himself, the former James Bond alias Pierce Brosnan, whose late in life segue into sentimental crooner on the big screen, is possibly not such a great idea.

There’s a neat message buried under all the high decibel song and dance, about a dad being no big deal when you can have three. Not to mention that counter to conventional wisdom, family is more about who loves you, than whatever does or doesn’t dangle between their legs. In any case, beware of movies ending in exclamation points.