A not so distant outrageous cousin to the twin white collar heist comedies, the 1977 original and 2005 Jim Carey knockoff Fun With Dick And Jane, Mad Money rules with subversive brazen wit, and minus the testosterone. This sassy sisterhood gone wild is the kooky brainchild of director Callie Khouri, who smashed through the cinematic glass ceiling of conventional meek moms and submissive sex objects to fire up the screen back when, with those bawdy bad girls Thelma & Louise. Though the tenacious trio of Mad Money is not into going over the cliff without a struggle to the bitter end, and it’s all ingenious and elusive enough to keep both the authorities and the audience on their collective toes for the duration. 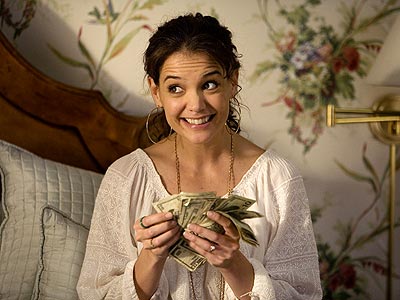 At the engagingly devious center of this collection of oddball, unlikely kindhearted crooks is Bridget (Diane Keaton), an older housewife in an elegant, upscale Kansas City burb whose comfy existence is in for a sudden rude awakening with a weakening economy, when her spouse (Ted Danson) is layed off from his lucrative job. With the lifelong breadwinner stuck in neutral and no funds to even pay the salary of their maid – except by offering to go clean her house, an idea she indignantly rejects – Bridget heads for the job market for the first time ever. But her resume boasting a single item – her advanced degree in comparative literature – meets with a decidedly underwhelming reaction over at the local unemployment office.

So like anyone with an advanced degree in comparative literature not much in demand these days, Bridget gratefully accepts the only job she’s apparently qualified for as a housewife – tidying up and cleaning the toilets over at the Federal Reserve Bank offices. Though when those huge carts full of thousands of bundles of worn out big bucks dumped daily into a paper shredder begin to look mighty tempting in comparison to a toilet brush, Bridget starts obsessing about sneaking out some of the expired cash in her undergarments, that are going to be dumped out of the Reserve system anyway.

But in order to pull off this scheme that can return Bridget to the lifestyle she’s been accustomed to, the newly bottom feeder baby boomer requires a couple of co-conspirators to infiltrate the strictly guarded vaults under 24/7 surveillance. And she’s got her eye on two far from enthused fellow female lower rung lifer employees on the shredder assembly line, stressed out dignified single mom Nina (Queen Latifah) and dim-witted trailer park hottie Jackie (Katie Holmes).

Eventually Bridget pesters the pair enough until they’re in on the risky scheme, but the cash perk rewards are enough to rope them in for the long haul.

If you’re thinking that there’s not much point in rooting for these ballsy babes all the way because in the end crime doesn’t pay, think again, sorta. Because even after they’re caught, the fun is really just beginning. Diane Keaton finally gets a role she can be cool with, after a series of duds that have come her way and are usually the lot of leftovers consigned to older actresses, however distinguished their reputation or prestige. And Queen Latifah as usual shines as a character with depth and conviction, no matter what the role. Though Katie Holmes doing the demeaning dumb blue collar female thing, comes off robotically as fake, phony and a tad too disrespectful. In any case, Mad Money’s got the wild energy of an assortment of irreverent leading ladies in charge, with some impressively laid back deferring male sidekicks, and the result is a comedy with brash style, and lots of incidental cash to spare.