Ethiopian Identity at Issue in Coming-of-Age Flick from Israel

9 year-old Schlomo (Sirak Sabahat) ended up in Israel in 1985 as part of Operation Moses, a humanitarian airlift of about 8,000 Ethiopian Jews fleeing religious persecution in their native country. The only thing wrong with this picture is that the little boy didn’t deserve to exercise any right of return like his fellow refugees, given that he was actually a Christian whose starving mother had him take the place of a child who had died.

Nonetheless, upon his arrival in Tel Aviv, he is presumed to be a Jewish orphan by the couple who adopt him, Yoram (Roschdy Zem) and Yael Harrari (Yael Abecassis). While hiding the fact that he is neither Jewish nor orphaned, Schlomo does his best to adapt to the culture and customs of the Holy Land. 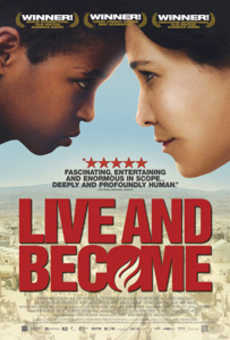 However, he soon finds that even if he were Jewish, most white Israelis seem to have a problem with his skin color, and don’t real consider him one of the Chosen People. This proves particularly challenging when he hits puberty and takes an interest in girls, especially Sarah (Roni Hadar), whose racist father doesn’t want his daughter dating a black kid.

These sort of fish-out-of-water scenarios abound in Live and Become, a coming-of-age, assimilation saga which covers 15 of Schlomo’s formative years. Over that timespan, we see the lost lad grow into a man while grappling with assorted identity issues. To its credit, the film fleshes out his character, treating him not as a freak or a curiosity but as an ever-evolving human experiencing a full range of emotions.

Consequently both his enduring, if awkward relationship with Sarah and his barely-tolerated presence in Israel in general combine to create a complicated and compelling character study which ultimately tells us as much about Schlomo’s tortured psyche as it does about an abundance of universal themes, from intolerance to abandonment to the need to belong. Brother from another temple.

In Amharic, Hebrew and French with subtitles.