Move over Book Of Eli. A messenger of the Almighty is coming to announce the end of days on earth in a theater near you and guess what, he’s British and possibly an obstetrician. And packing crates full of Uzis. Which makes this supernatural thriller quite a blast as a dark comedy, but as horror, not so much.

Part theological terrorism and part revenge of the rednecks, Legion finds rebel angel Michael (Paul Bettany doing Darwin and a Dirty Harry assistant deity simultaneously at plexes across the nation right now) descending into LA just before Christmas Day, covered in tattooes and on a mission to save humankind from God’s wrath. Well actually, one human, a California desert waitress (Adrianne Palicki) at a truckstop called Paradise Falls, where it’s not uncommon to serve bloody steak with flies, and who is about to give birth to somebody or other’s love child. And if you have no idea where this movie is going by now, then bets are on that you never heard of Santa Claus either. 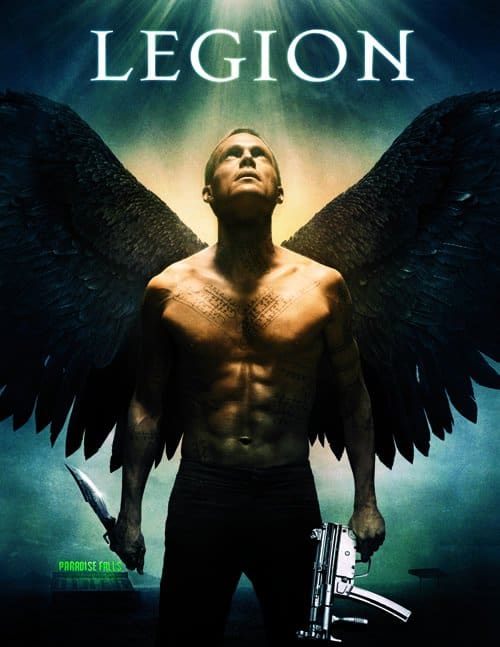 Meanwhile, possessed motorists with potty mouths keep turning up for a little home invasion of the premises, walking on ceilings and biting people when not causing the one armed cook (Charles S. Dutton) to scream for his bible. And it’s all because God has become fed up with the wicked ways of humans, and is issuing vacate orders for everybody on the planet. But running interference is his defector angel Michael, who’s more of a give them second chance kinda guy, while holed up with assorted panicked humans, including grouchy diner boss Bob (Dennis Quaid).

More often than not sensitive male thespian Bettany isn’t half bad getting in touch here with his macho side in this ‘if you can’t join ’em beat ’em’ born again bad guys doomsday thriller. And while fairly adamant as a parental rights advocate, even when facing down what seems like an entire population of pro-abortion busybodies in his midst.

ABOUT US
NewsBlaze is the alternative business and world news newspaper, with entertainment, music, politics, and the latest breaking news and videos.Visit the NewsBlaze Pressroom to see NewsBlaze in the News
Contact us: [email protected]com
FOLLOW US
© Copyright (c) 2004-2021 - NewsBlaze Pty. Ltd.
Posting....
Go to mobile version