When you’re working with a script as slight and insubstantial as Last Chance Harvey’s, you’re lucky to land actors of the caliber of Dustin Hoffman and Emma Thompson. This means British director Joel Hopkins owes a debt of gratitude to these talented Oscar-winners for generating the requisite chemistry while imbuing what would have otherwise merely been a superficial sitcom with enough gravitas to make it well worth watching.

Hoffman handles the title role as Harvey Shine, an aging New Yorker facing last chances at love, career and fatherhood. As the story opens, we find the frustrated jazz pianist having a hard time holding on to his day gig as a TV-jingle writer. Despite a stern warning from his boss (Richard Schiff) that his job is in jeopardy unless he attends an important meeting the upcoming Monday morning, he flies to London over the weekend for the impending wedding of his estranged daughter, Susan (Liane Balaban), to a chap named Scott (Daniel Lapaine).

Harvey would like to reconcile their strained relationship, but soon comes to regret his decision to attend when, shortly before the ceremony, Susan informs him that she’s already asked her step-dad (James Brolin) to walk her down the aisle. Devastated by the snub, he rushes back to Heathrow but arrives too late to catch a flight back in time to prevent his being fired. 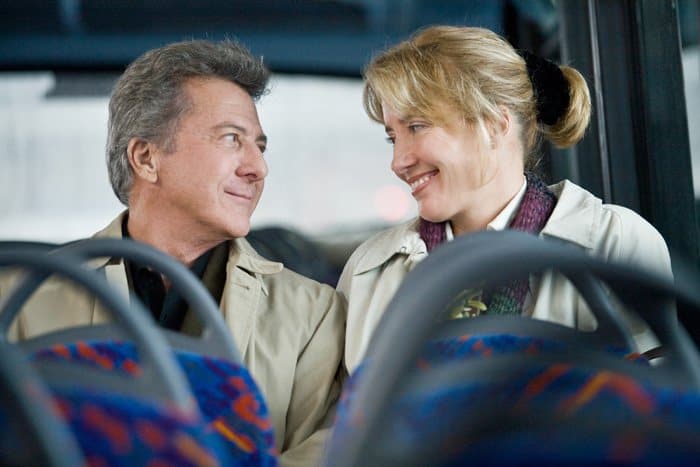 So, he dejectedly drags himself into the airport bar to cry in his beer. But while sitting in the pub he becomes instantly smitten with Kate (Thompson), the empty establishment’s only other customer. Striking up a conversation with the shy and retiring spinster, Harvey learns that, lo and behold, she’s also down-in-the-dumps. Besides being stuck in a dead-end government job, the middle-aged civil servant’s social life leaves much to be desired, between blind dates from hell and the constant smothering from her hovering helicopter mom (Eileen Atkins).

It is therefore no surprise when sparks start to fly between these two losers, and Kate grudgingly agrees to accompany Harvey to his daughter’s wedding. After the reception, Harvey puts his plans to return to the States on hold indefinitely to pursue the whirlwind romance which ensues.

Will the affair blossom into full-blown love? That is the unanswered question at the center of the Last Chance Harvey, an emotionally-restrained adventure which conveniently devotes more attention to shooting its cuddly protagonists against a variety of spectacular London backdrops than to having them explore their feelings in any meaningful depth. Don’t expect anything more than a pleasant, if predictable, deliberately-paced diversion of this lonely hearts saga, and you won’t be disappointed.

Hoffman and Thompson team to weave movie magic via a vintage romantic roundelay.

To see a trailer for Last Chance Harvey,