Time travel toilet humor meets sci-fi grossout in Brad Silberling’s Land Of The Lost, a spoof of a popular 1970s Saturday morning television kids show created by Sid and Marty Krofft, in which the writing is as primitive as the tacky prehistoric decor. Will Ferrell does his best to kick start a bland blend of comedy and campy suspense as he’s tossed into what his character describes as a sideways time warp, don’t ask, but co-starring with a bunch of wilding dinosaurs does not seem to be his forte.

Ferrell is Dr. Rick Marshall in Land Of The Lost, a disgraced scientist whose theories about time travel land him on Matt Lauer’s talk show as a butt of extreme ridicule, concluding with the host having to pacify the high IQ lunatic with a fire extinguisher. When one of Dr. Rick’s diehard fans, research assistant Holly (Anna Friel) turns up one day wielding a lost and found fossil as a mysterious clue, she convinces the demoralized brainiac to pursue his cosmic hunches. And they embark on a kooky expedition armed with the self-important paleontologist’s boom box blaring ‘gay show tunes,’ that fills in as your basic Geiger counter.

Engaging the services along the way of Devil’s Canyon roadside attraction survivalist in his own mind Will (Danny McBride) as macho sidekick, the trio tumble into a parallel dimension when an earthquake strikes. Where they’re met by a decidedly lewd monkey man Chaka (Jorma Taccone), who is impulsively fond of fondling human private parts without permission, apparently not a felony in prehistoric times. 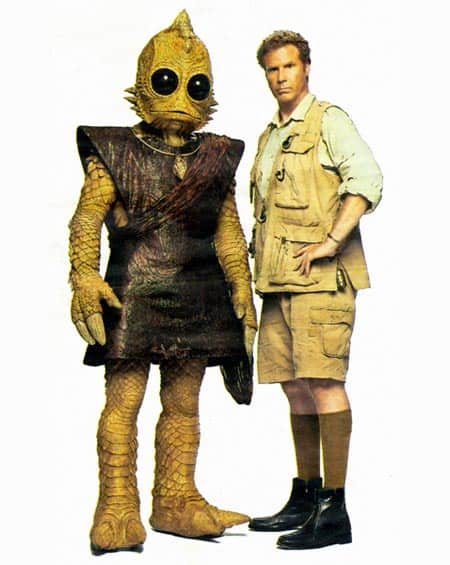 Ferrell and company’s misadventures through a scatalogical inner space populated by rampaging retro-reptiles and the original baddies du jour, the more sleaze than Sleestaks, is a primarily dull outing whose rare moments of humor seem to arrive centuries apart. While an overload of boob sign language chuckles, dinosaur urine as a magic beverage, Tyrannosaurus Rex tongue baths, and Ferrell strutting his survival instincts by morphing into a dung-coated reptilian suppository, dominate the sparse storytelling proceedings on hand.

Final verdict on Land Of The Lost: Go take a hike.