A stunningly stylized doomsday noir that elegantly rises above the often hokey yarn wildly spinning out of control within, Knowing captivates, even at its most outlandish. Director Alex Proyas, who cut his teeth on gems like the visionary Dark City and The Crow, settles on more metaphysical obsessions this time around, but with no less of a gift for simultaneously unnerving and mystifying audiences.

Nicolas Cage does what he does best here, as frazzled MIT astrophysics Professor Koestler. Recently widowed, hitting the booze too hard, and with a frequently obstinate son Caleb (Chandler Canterbury) he’s left with to raise singlehandedly, Koestler is the sort of morose, internalized professor who when asked by his students whether events taking place in the universe are random or predetermined, simply mumbles, ‘I think shit just happens.’ So deep is his funk, that Koestler even turns down an offer by a ‘Ph double DD’ colleague to join her for dinner.

When a time capsule full of letters buried by students at Caleb’s school fifty years into the past is unearthed with great fanfare, the boy appears to come under the spell of a note laden with numbers scribbled by a distraught young girl half a century ago. Soon mysterious strangers start showing up at the house, handing Caleb pebbles, as he is alerted to visions of burning forests and wildlife on fire outside his bedroom window.

Eventually the egghead dad figures out that all those numbers have some terrifying connection to both past and future horrific events. And joining forces with the grown daughter (Rose Byrne) of that now deceased distraught schoolgirl of fifty years ago, Cage is in a race with the clock to, well, save the world in the ‘Nic’ of time. 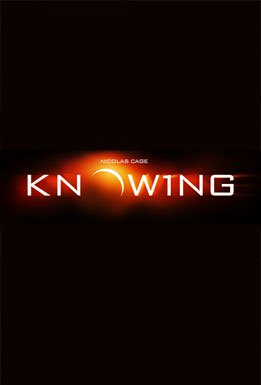 Less mysticism, astrophysics or numerology than really frightening spookonometry, Knowing features striking craftsmanship teeming with nightmarish imagery that effectively takes your breath away, even with all sorts of senseless premises and gaping plot holes afoot. Including those aforementioned menacing apparitions in raincoats, who unlike Dr. Manhattan over in the adjoining multiplex, modestly flash anatomically incorrect torsos. To sum up, Knowing is humanity’s worst fears and a little ET, or rather EE, with rabbits and sign language tossed in for good measure.