Toy dolls for little girls don’t all have to be about dumb blondes and bubble-brained buxom Barbies. The American Girl Historical Characters series also features a surprising selection of dolls that includes a ‘hopeful’ Latina, ‘daring’ Native American, ‘courageous’ Civil War era runaway slave and, yes, ‘resourceful girls during the Great Depression.’ Which kinda makes you feel like catching a time travel express back to childhood, just to experience them.

But lucky for those females of a somewhat more mature age bitten by the nostalgia bug, those Great Depression diminutive damsels who impress have now morphed into a feature film of their own. And Kit Kittredge: An American Girl is steeped in humor, history, imagination, and plenty of quality kid wisdom to impart to the less enlightened adults around them. 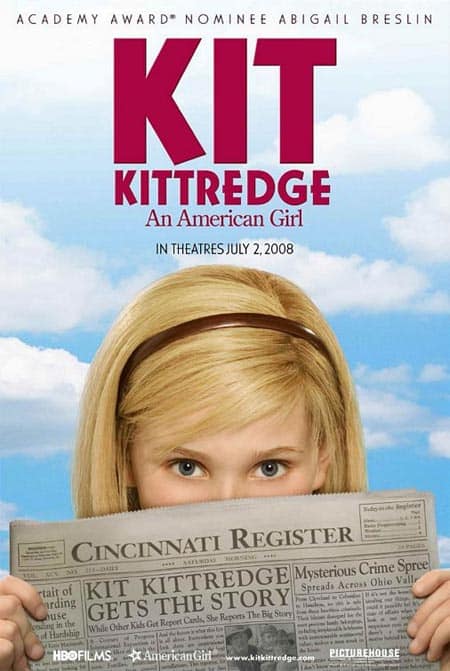 Abigail Breslin, who tends to show up at least once a year on screen to amaze with her vivacious talents, is the gabby 1930’s Cincinnati pre-feminist Kit, a ten year old aspiring newspaper reporter with an aversion to glass ceilings, as well as the word ‘no.’ And her current combo hobby and obsession is showing up to annoy the town’s grouchy newspaper editor (Wallace Shawn), by insisting that he give a serious listen to the fabulous stories she’s got to pitch, while seemingly totally unaware that she’s not an adult herself.

At the same time, the Great Depression is deepening, and prosperous, sympathetic folks like her mom (Julia Ormond) and dad (Chris O’Donnell) who have been extending a helping hand to the poor and homeless, suddenly find themselves on the verge of joining their ranks. And while neighbors and friends become the victims of foreclosures on their homes, Kit’s newly unemployed dad leaves town to find work and Mom, to make ends meet, takes in a collection of exceedingly kooky and charming boarders. Among them are crafty magician Mr. Berk (Stanley Tucci), shamelessly flirty dance instructor Miss Dooley (Jane Krakowski), and daffy mobile librarian, Miss Bond (Joan Cusack).

Rarely has a Hollywood film – in particular a children’s movie – delved with such candor and compassion into the darker recesses of this country’s history, like the Great Depression. Or explored so eloquently the economic and emotional toll it took on masses of people, and the cruel indifference of those more fortunate – at least for the moment. And all the while expressing a stirring reverence for the collective solidarity, fortitude and determination of the economically displaced – and the productive lives they led before poverty – to survive the hobo jungles, soup kitchens and vagrancy detention lockups.

In any case, Kit finds her big scoop to write about, in the accelerating social tragedy that unknowingly existed the whole time, and that she just had to look all around her to discover. There’s also a juicy shocker of a local mystery, that gets tossed in for good measure for Kitt and small fry company to unravel too. And it’s got plenty to do with all the bad behavior those unruly adults in their midst can get themselves messed up in.

Directed by Patricia Rozema (I Hear The Mermaids Singing) and executive produced by Julia Roberts, Kit Kittredge: An American Girl is a gem of a girl power tale to enlighten and enthrall audiences of all genders, big and small. And its sweetly delivered message for kids about confronting problems with your head and heart instead of hurting others, is a welcome and refreshing alternative these days in movies.