When he was an adolescent, Justin Schumacher (Jamie Kennedy) was left in a coma after landing on his head while breakdancing. Fast forward twenty years and we find his parents (Christopher McDonald and Debra Jo Rupp) pulling the plug on their son’s life support system due to his degenerating vegetative state and their mounting debt.

Miraculously, instead of dying, Justin recovers, though he is still 12 mentally but now in the body of a 32-year-old. Eager to help pay off his medical bills he comes up with the bright idea of entering a dance contest with $100,000 grand prize. So, he tracks down the three other members of his pre-teen posse, The Funky Fresh Boys, to see if they’re interested in a reunion. 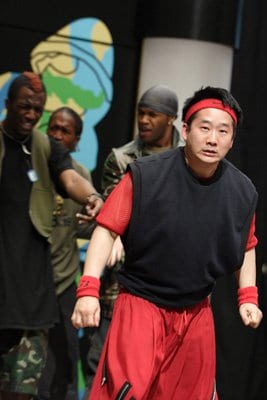 First, he finds his best friend Darnell (Miguel Nunez, Jr.) who is married but unemployed and gets no respect from his sassy wife, Roxanne (Vivica A. Fox). Though her husband denies that he’s the father of her three kids, she warns him as he leaves, “I don’t want to see your black ass again till you get a whole lot of money or a whole lot of diapers.”

Next approached is the morbidly obese Hector Jimenez (Aris Alvarado), who’s happy to ditch his job as a meter maid. Talking Aki Terasaki (Bobby Lee) into rejoining them isn’t as easy, since he’s making good money in a white collar corporate position. However, it’s hard for him to resist when they ask him to say “booby traps” so they can laugh at his Asian accent. 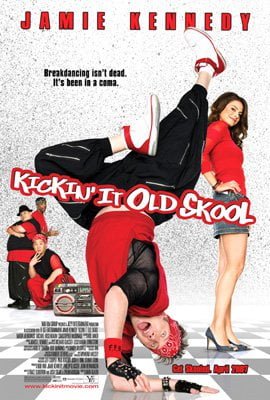 Not one scene of this disgusting shocksploit is either entertaining or funny; proof being its failure to elicit even one laugh out of anyone at the screening, which this critic attended. Another negative is the picture’s profusion of prominent placement ads for Pepsi, Nike, Apple and Pop Rocks, and equally-distracting cameos by David Hasselhoff, Erik Estrada, Rowdy Roddy Piper, Alan Ruck (Cameron of Ferris Bueller), John Ratzenberger and Emmanuelle “Webster” Lewis who has my permission to return to obscurity after embarrassing himself by calling a woman a ho before slapping her on the butt.

Jamie Kennedy ought to let a bomb-sniffing dog check out scripts for him. 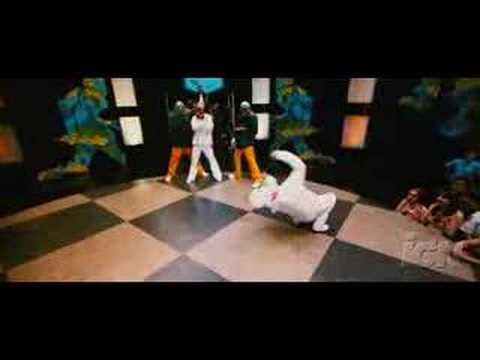