This is a true story about a Washington lobbyist who swindles millions of dollars from native American casino owners. The idea of the politically powerful being pitted against ancestral Indian tribes is a fascinating concept.

But the filmmakers are in such a hurry that, instead of drawing us into their unique new world, many powerful moments are simply tossed in. We are never invited to get close to the characters as they go to do battle.

Jack Abramoff (Kevin Spacey) is a highly successful lobbyist who spends a lot of time on golf courses and in the White House. When he offers his political services to a casino, owned by the Choctaw Indian tribe, he is turned down because, at $10 million a month, his fees are too expensive. Determined to have a slice of the cash that the casino generates, he engineers a change of management. With his goal accomplished, his fortune grows, as does his greed.

We meet a lot of characters at the beginning of this film but none, apart from Abramoff, are memorable and the storyline is so busy it becomes confusing. Kevin Spacey, of course, plays the villain brilliantly and his compelling performance deftly covers many of the cracks. But when he tries to get intimate with a voice over, it makes us uncomfortable because we don’t like who he is or what he does. He and his side-kick, Mick Scanlon (Barry Pepper), who contributes nothing to the film, constantly do impressions of characters from other movies which is invariably fatal and in no way helps to elevate the lack luster dialogue. 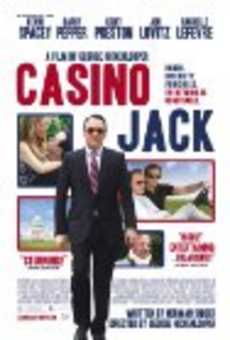 The structure of the story is often fractured. Abramoff and his colleagues enjoy a life of obscene wealth. But in the midst of this Abramoff receives a letter about a late mortgage payment. Little later whines that his outgoings are drowning him. Soon after, he is extremely wealthy but we didn’t share the journey that got him there. Equally under-told are the events just after Abramoff’s first domino falls. Instead of spinning into the stratosphere, there’s a humdrum scene with Mr & Mrs Abramoff and the tumultuous fall out of the super-lobbyist’s misdeeds limp tamely behind.

The status of the indigenous nations is not globally known. There’s a whole generation of baby boomers living outside the US. They were raised on westerns and the Lone Ranger in particular and whose romantic image of these mystical tribes is still intact. They will be fascinated to know that reservations have been retained. If only geographically, and that tribal names are still being used, but they will also have to accept that it’s not just us who have moved on. Tonto’s descendents probably don’t know one end of a horse from the other. On top of that, sleeping next to mother earth now has as much appeal to them as floor boards do to us so the wigwam is long gone and has been replaced by a chic little starter home, furnished by Ikea.