This is a TV mini-series about the most famous, charismatic family in American history but somehow the writers manage to make the entire clan look completely boring. This is mainly because they all talk in dreadful cliches from beginning to end and there is no sense of the tense, political machine to which these fabled people belong.

The story begins when Joe Kennedy Sr is in the Senate but his presidential ambitions are thwarted when he is labeled as a Hitler supporter for voicing his dissent at America’s participation in World War II. He lives the rest of his life vicariously through his sons, who obligingly dance to his tune. The series continues through the Bay of Pigs, the Cuban Missile Crisis and the struggle for civil rights. 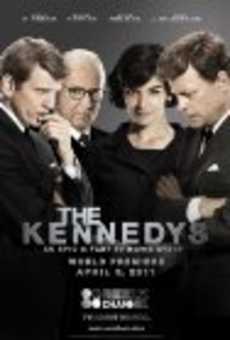 The biggest mystery of this high-budget show is why the lead role was given to Tom Wilkinson, an English actor, who makes not even a feeble attempt at an American accent. All his speeches about patriotism and family roots sound rather bizarre because they’re being delivered by someone who sounds more like Winston Churchill than anyone else. English and American vocabulary and in particular colloquialisms vary vastly and this not-supposed-to-be-there difference makes an already weak script surreal, and not in a good way.

For some inexplicable reason the story is told in flashbacks, which could have been a decision made in the editing room when the producers realized there is a complete lack of pace and each scene is simply a plod to get to the next. Unfortunately, a turkey is a turkey and no jumping around in the world is going to save it; all the flashbacks do is irritate and make it seem like it’s taking forever to get anywhere.

There was much made in the press about this 8-episode, star-studded series first being turned down by The History Channel, for what they claim were “political reasons,” and then by Showtime, who said it was “off brand.” It was finally picked up by the low-profile ReelzChannel, who announced it was their “biggest acquisition ever,” which we can safely assume translates as “biggest bargain.” But the producers were wise to relegate this offering to a “buy one, get 7 free” deal because, when you’ve gone that far down the food chain, the only audience you’re likely to attract are the ones who want to know what all the fuss is about and reviewers looking for a fresh kill. Objective achieved.

Now available on DVD and streaming.