Written by Richard Matheson in 1954, I Am Legend was a harrowing tale of survival pitting the last human alive against the horde of bloodthirsty vampires who had taken control of Earth. The book’s hero, Robert Neville, relied on a combination of garlic, mirrors, stakes, sunlight and crosses to keep the cannibals at bay while he simultaneously tried to come up with a the scientific explanation for the plague which had turned everybody else into zombies.

The Last Man on Earth (1964), starring Vincent Price, was the first film adaptation of the apocalyptic best seller. That, in turn, was followed by The Omega Man (1971) with Charlton Heston and, more recently, by I Am Omega (2007), a straight-to-video rip-off released just last month.

Now, we have I Am Legend, a relatively-realistic, modern update of the original which reflects present-day sensibilities by having its apocalyptic scenario result from a man-made virus. The picture is a Will Smith vehicle in the purest sense, given that he spends more than half of the movie on screen alone (ala Tom Hanks in Cast Away), unless you count the omnipresent Samantha, his trusty, tagalong German Shepherd.

Thus, the production represents a true test of Smith’s star power, as its fortunes are fated to rise or fall to the extent that he convinces his audience to invest emotionally in his lonely protagonist’s desperate plight as he perambulates the eerie exoskeleton of a depopulated Manhattan. The point of departure is 2009, which is when one Dr. Alice Crippen (Emma Thompson) announces the discovery of a cure for cancer to the world, not knowing that the vaccine also causes rabies.

Fast-forward three years, and we find New York in chaos. The healthy few are in the midst of being quickly evacuated, while all the infected folks are morphing into ghouls and being left behind. And although Lieutenant Colonel Robert Neville (Smith) has been given a clean bill of health, he gallantly opts to stay in the city to work on an antidote.

You see, he’s a virologist, and has a fully-equipped, state-of-the-art lab in the basement of his brownstone bordering Washington Square Park. So, after he tearfully bids his wife (Salli Richardson) and daughter (Willow Smith) adieu, he proceeds to divide his time between scientific research and blowing away the occasional nocturnal creature he encounters after dark.

Not surprisingly, Will Smith comes across as quite the macho charmer in his familiar role as the hero having to save the planet. Afterall, he’s successfully played this sort of character plenty of times before, most notably in such CGI-driven spectaculars as Independence Day (1996), Men in Black (1997) and Men in Black II (2002). But who knows how a holiday season release of this summer-style blockbuster will be met?

I Am Legend is actually at its best early on, while Will is solo and captured starkly against the breathtaking backdrop of the vast, urban wasteland. Unfortunately, the second-rate special effects leave a lot to be desired, so the arrival of the cheesy mansters he has to wrestle with fails to measure up to the tension built in anticipation. 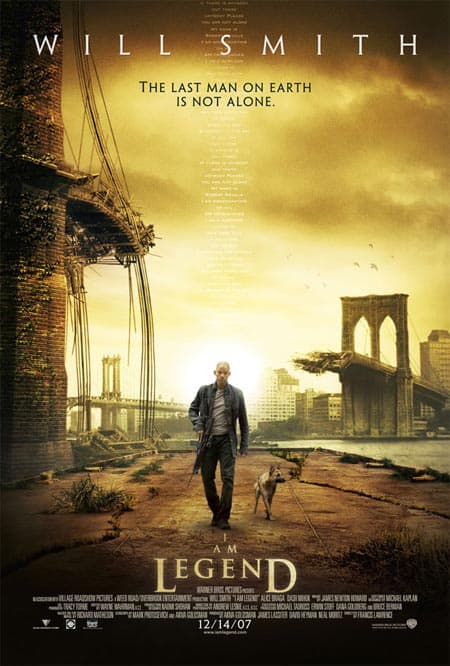 The movie has a couple of other annoying flaws, neither of which could be discussed without spoiling the fun. Suffice to say that the first involves the introduction of two new characters near the end, and the other revolves around the movie’s revised resolution which delivers a distinctly different message from that of the book.

Nonetheless, it’s got a great performance by Will Smith and just enough edge-of-your-seat entertainment to remain recommended, even if the cinematic house of cards collapses during the third act.