It’s not that easy to imagine yourself sitting down to have a conversation with a legendary diva of movies. But that’s just what happened when Catherine Deneuve stopped by to have a most casual and forthright exchange about her latest role voicing a character in French-Iranian filmmaker Marjane Satrapi’s coming-of-age animated feature, Persepolis.

While girl coming-of-age films in the US more often than not shed a narrow spotlight on boys and bras, the tragicomic screen-toon Persepolis has something far greater in mind. Namely, a boldly refreshing awakening to the world out there that goes beyond the personal, and embraces a multitude of political concepts. 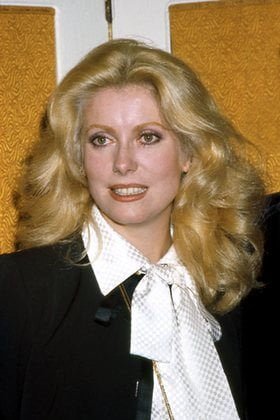 Based on a popular French collection of four graphic novels, Persepolis is an illustrated movie biopic visualizing through vividly illuminating animation the life of filmmaker and graphic artist Marjane Satrapi, who was born in Iran and sent to live in Europe at the age of fourteen. The distinguished actresses who voice the affectionately fleshed out charismatic Iranian women include Chiara Mastroianni as Marjane, Catherine Deneuve as her mother Tadji (and in real life the mom with dad Marcello Mastroianni of offspring Chiara), and Danielle Darrieux voicing the role of Marjane’s grandmother.

Persepolis extends from the 1970’s through the 1990s, with stark and often volatile history as a relentless force and backdrop to emotion, passion and cultural dislocation. Marjane grows up in a colorful and idealistic, creatively stimulating household, the daughter of leftist intellectual parents, much like the young female protagonist in Blame It On Fidel. But the US backed Shah has established a period of brutal repression, and activists, including within her own family, are being arrested as political prisoners, disappeared, tortured and in many cases executed. When the Islamic Revolution unfolds, with a furious fundamentalist backlash against foreign economic domination and Western cultural decadence, Marjane and her friends find themselves subjected to strict religious conformist conventions concerning female behavior and dress.

Marjane remains a politically outspoken schoolgirl, and so her family, fearing for her defiant nature, sends her off to be schooled in Europe. There Marjane encounters a different set of oppressive experiences, including ethnic prejudice and sexual exploitation. Persepolis is a remarkably eloquent personal journey into complicated womanhood, whose candor and poetry of the naked soul make one quickly forget that this is a movietoon, as it reaches into the heart to explore raw emotion and existential pain. Deneuve, who was elated about the novel experience of voicing a character for Persepolis once she tried it out, had much to relate during this interview about being a determined woman of her own mind throughout her life, even when it came to interacting with forceful personalities like Bunuel and Truffaut in her movies; the lack of what she feels is unfettered personal vision in Hollywood that makes her not want to move there; and the stress of a world that’s moving much too fast these days. Oh, and what kind of place is America, that has a thing against smoking.

[Catherine, an avid chain smoker, starts to light up a cigarette].

You know, it would be great if you didn’t smoke in here.

CATHERINE DENEUVE: Since when? Since it’s forbidden to smoke in America! Hmm, okay…What is this book?

It’s Persepolis. Haven’t you seen it yet?

CD: Yes, but I have the French edition. And it’s bigger.

Wonder why. So did you ever imagine yourself as voicing a character in Persepolis?

Well what did you think about that?

CD: When I first heard about the film, I thought it was a great idea, of course.

What excited you about THIS FILM?

CD: Oh, that it’s really moving and unusual. And very political, in a good way.

Have you ever visited Iran?

CD: I don’t want to be in a place where i can’t do or say what I want.

Is there anywhere in the world you think you could go, and not be recognized?

CD: I don’t know. But to not be recognized somewhere, that would be very appealing to me! That reminds me when I went to Vietnam for the first time. And it felt like something really special to me. You know, to be walking in the street, and nobody knowing you.

CD: it was great. You know, it’s not like you’re doing a squirrel or a duck! So you don’t have to do anything bizarre.

What kind of preparation did you have to go through?

CD: None. I don’t prepare for films! You just concentrate, that’s it. But I think it’s fun for an actor, just to play with your voice.

Did you ever think about moving to Hollywood to make movies?

CD: No. Because nothing interesting was ever proposed to me. I think it would have been difficult anyway for me to move to Hollywood. But the propositions have never been interesting enough, or the characters. So I’m not coming to Hollywood if what I’m offered is less interesting than the movies I’m offered in Europe.

What do you see as the difference between Hollywood and European filmmaking?

CD: I think it’s a big difference. It’s that in America, the producer is almost as important as the director. You know, in the making of the film. And it’s an extreme that can be not so good for the film.

And I find that a director needs to be completely alone, in having the final cut. And the right to do exactly what he wants, and even fight with the producer. And in the end, in France, the director wins.

So it’s very complicated. But I find that the way films are made in America, with all the people writing the script, sometimes it’s too conventional. But it can be a mix of both bad and good.

What director among the many legends you’ve worked under like Truffaut and Bunuel, would you say has influenced you most as an actress?

CD: Actually, it was never about changing my way of thinking about acting. It was about growing. And I started to do films when I was very young. I did learn things very young from Jacques Demi, and later from Bunuel and Truffaut. But I wouldn’t say that any of them made me change my mind about anything.

I was quite young at the time, so I was making up my own mind about what I wanted to do and which direction I wanted to take. But I haven’t changed my mind much since I was eighteen or twenty, in my tastes.

What would you hope Persepolis to convey to audiences about the lives of women today?

CD: I like the politics in the film, and the humor as well. It’s very touching sometimes. and also quite funny. And I think that what Marjane is trying to show with this movie, but talking about the everyday life of one little girl, that you get to touch on other issues that are really important. Like that these are people just like you and me.

You know, they like to dance, and they like to fall in love. And they have heartbreaks, and they suffer. Because otherwise in the media, there’s no reality to it. And people tend to forget that. There are just such preconceived ideas.

So I think that’s important. And what she wanted to show through the film, is that there are human beings behind the politics. And it’s unfortunate that the media always tends to show this as a concept, and not really going deep into an understanding, and behind that.

It’s like nobody has any time for such things anymore. News just comes from all over the world, into a big melting pot. And the way to relate political stories and what’s happening in other countries, it’s just all too fast now.

What part of the world do you live in now?

Do you feel like a kind of ambassador whenever you do a movie?

CD: No way! I never think like that. No, no, I don’t feel like that at all. No, I don’t see things like that. Because doing a film and being an actress, I don’t see myself as having a role to do. Just a film role to play.